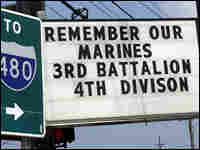 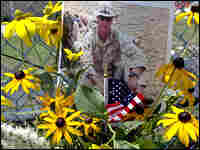 The 14 Marines killed in Iraq Wednesday and the six killed Monday all belonged to the same Ohio-based battalion. The Headquarters & Services Company, 25th Marine Regiment, 3rd battalion is headquartered in Brook Park, Ohio, a suburb of Cleveland.

As Renita Jablonski of member station WCPN reports, the community has been hit hard by the losses, and it's trying to honor the memory of the Marines lost in the week's attacks.

The Wednesday attack, in which a roadside explosive detonated beneath the Marines' amphibious vehicle, is the single most deadly improvised explosive attack on U.S. forces since the war began.

A Marine Corps spokesman says the military is still notifying families of those killed today and will not release names until that process is complete.