Accessibility links
Rick Santorum, 'It Takes a Family' Sen. Rick Santorum (R-PA) is one of the Republican Party's strongest and most conservative voices. He talks about his new book, It Takes a Family, where he discusses the politics of intelligent design, and what he'd like to hear from Supreme Court nominee John Roberts.

Sen. Rick Santorum (R-PA) is one of the Republican Party's strongest and most conservative voices. He talks about his new book, It Takes a Family, where he discusses the politics of intelligent design, and what he'd like to hear from Supreme Court nominee John Roberts.

One of the Senate's leading conservatives is also considered a vulnerable senator in next year's elections. Republican Rick Santorum has chosen this moment to publish a book, attacking what he calls the bigs: big government, big media, big entertainment, big universities. The book is called "It Takes a Family," which plays off Hillary Clinton's book title, "It Takes a Village." Santorum says he's critiquing the ideology of the left, and he also questions some conservatives.

Senator RICK SANTORUM ("It Takes a Family"): They have this idea that people should be left alone, be able to do whatever they want to do. Government should keep our taxes down and keep our regulation low and that we shouldn't get involved in the bedroom, we shouldn't get involved in cultural issues, you know, people should do whatever they want. Well, that is not how traditional conservatives view the world, and I think most conservatives understand that individuals can't go it alone, that there is no such society that I'm aware of where we've had radical individualism and that it succeeds as a culture.

INSKEEP: You mentioned earlier a list of what you call bigs, opponents in a sense of what you stand for: big government, big labor. I want to ask about one item on the...

INSKEEP: That's the one I want to ask about. Why big business?

Sen. SANTORUM: You know, one of the things that I realize is that if you look at big business, I mean, they--and what they fund and what they do, they don't really--they don't fund the small non-profit community-based organizations that really are out there on the front lines helping people. They fund the big philanthropies. They're safe. But they're also, by and large, not family-friendly, they're not faith-friendly. Candidly, I believe most corporations actually don't mind big government.

Sen. SANTORUM: Yeah. And I do vote with--on a pro-economic growth agenda, and that's pretty much what the Chamber of Commerce votes on. I'm talking about their behaviors with respect to the culture.

INSKEEP: Center for Responsive Politics said that you received $2.4 million or so from political action committees, from various businesses. Is there a contradiction there?

INSKEEP: I guess the fundamental question there is, is there a tension in the Republican coalition, that's been very successful in recent years, that needs to be resolved in some way between the business wing and the wing that you represent?

Sen. SANTORUM: Well, I mean, I would suggest that the business wing is not as tuned in or do they care? And some would argue that the shareholders don't want them to care about where society is going, where the culture is going, where the family is going. If you look at the big entertainment industry and their pursuit of the bottom line profits in exchange for producing content and distributing that content and marketing that content to inappropriate audiences, that's a problem for me.

INSKEEP: I want to ask about a couple of other items here. President Bush in the last several days has said that he believes intelligent design, the idea that there is a creator behind the work of the world that we see, that intelligent design should be taught in schools. What do you think of that?

Sen. SANTORUM: I think I would probably tailor that a little more than what the president has suggested, that I'm not comfortable with intelligent design being taught in the science classroom. What we should be teaching are the problems and holes and I think there are legitimate problems and holes in the theory of evolution. And what we need to do is to present those fairly from a scientific point of view. And we should lay out areas in which the evidence supports evolution and the areas in the evidence that does not.

INSKEEP: Why do what you see as holes in the theory of evolution, and there are scientists who will hear on our air that will disagree with the idea that there really are that many holes...

INSKEEP: ...why does that particular item of the academic curriculum concern you as a United States senator?

INSKEEP: Why would those holes matter to you?

INSKEEP: You have become so much more powerful than your critics that I wonder how you can continue to feel oppressed. You're laughing.

INSKEEP: You think that you are oppressed here.

Sen. SANTORUM: No, I'm not feeling oppressed at all. I feel very blessed to be in the position I'm in. All I'm suggesting is is that if you look at some of the things just that I have been called in recent days, you know, whacked out, nut case, weird, on drugs, sanctimonious, hypocritical, idiot, stupid--I mean, these are things...

Sen. SANTORUM: I'm reading from a list of what...

Sen. SANTORUM: Right, on my BlackBerry, of things just in the last week I've been called for saying some of these, quote, "controversial things" like parents should spend more time at home with their kids. The education system should be parent-centered and that should be serving the needs of parents, not the needs of the institution, controversial things that say life begins at conception and we should honor and respect life at all stages.

INSKEEP: In the coming weeks, the US Senate will be considering the nomination of John Roberts to the US Supreme Court, President Bush's first pick. What do you want to hear from John Roberts when he speaks to the Senate?

Sen. SANTORUM: What I want to hear is a judge who understands their place as a judge, and that is that they are not the person who runs the United States government, that they are there to arbitrate disputes. I have a quote in here. Thomas Jefferson said in 1821, quote, "The germ of destruction of our nation is in the power of the judiciary." This is how I view what's going on in the courts today. Quietly, silently, they've become the final arbiter of everything.

INSKEEP: When the newest Supreme Court justice considers a case in Roe vs. Wade, which seems entirely likely, how should that justice regard the past 32 years of precedents which have found in favor of a right to life?

INSKEEP: Rick Santorum is a United States senator from Pennsylvania and the author of "It Takes a Family."

Senator, thanks very much. 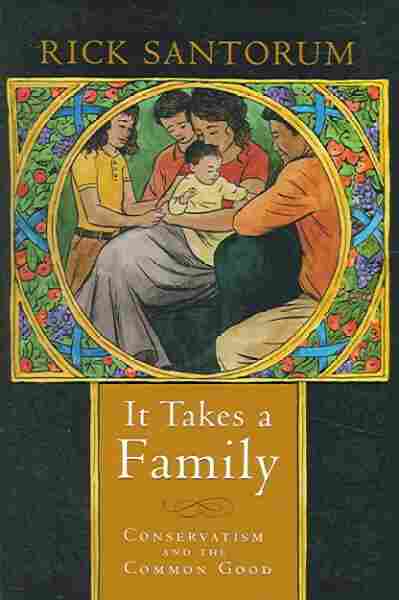 It Takes A Family

Conservatism And The Common Good