Accessibility links
'The Essence of Style' and Louis XIV Joan DeJean, author of The Essence of Style: How the French Invented High Fashion, Fine Food, Chic Cafes, Style, Sophistication, and Glamour!, aims to prove that almost everything we think of as glamorous can be traced back to the 1600s and the tastes of French monarch Louis XIV.

Listen
'The Essence of Style' and Louis XIV

Joan DeJean, author of The Essence of Style: How the French Invented High Fashion, Fine Food, Chic Cafes, Style, Sophistication, and Glamour!, aims to prove that almost everything we think of as glamorous can be traced back to the 1600s and the tastes of French monarch Louis XIV. 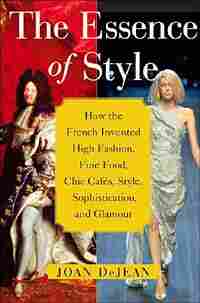 toggle caption
Simon and Schuster
Read an Excerpt from 'The Essence of Style' at SimonSays.com

A new book makes the case that almost everything we think of as glamorous can be traced back to one moment in history and one exceptionally stylish French king. You can get a good way into this book simply by reading the title. It's called "The Essence of Style: How the French Invented High Fashion, Fine Food, Chic Cafes, Style, Sophistication and Glamour." Renee Montagne spoke with the author.

Joan DeJean is a serious scholar of French culture and one who has noticed that the high heels and mules made fashionable by Louis XIV are still a la mode, in style. So are champagne, creme brulee, diamond bling, all of which came into being during his reign. DeJean writes that from about 1660 to his death some 50 years later, this king, along with his business-savvy finance minister, created an industry out of luxury. Rival England, Louis sniffed, was a nation of shopkeepers. France would offer the experience of shopping.

Ms. JOAN DeJEAN (Author, "The Essence of Style"): What they were trying to do, Louis and all the people who worked with him and who created this moment, they were trying to make an elegant experience. Before then, there were shops all over cities. However, the inside of the shop, what we think of as the shop today, existed only as a storehouse. Goods were kept inside and you--they put their goods out just, you know, sort of primitive kind of display. There wasn't much room, and that's how people bought, when they bought in shops.

Sometime in the 1670s and 1680s, the first boutiques were created, when--the way we think of them today, that is, people began going inside to shop, the interiors of shops became, therefore, the central part and they're elegant for the first time. They try to create ambience. They display the goods beautifully. They lay them out.

Ms. DeJEAN: There's several things are different. First of all, people decide that the best way to market, which we know, for fashion is to have seasons. That--the idea that there are new things that are `in' every season and that things change, so you can't wear the color you wore last summer. There's a new way of wearing skirts. Shoe styles change so that there's ribbons on shoes or buttons on shoes or the heels are different, all in the service of you have to buy more and more and more, and even if you don't need the things.

MONTAGNE: In order to market fashion and to keep everybody abreast of what the fashion for the season is, you know, one newspaperman came up with what amounts to the beginnings of the fashion press.

Ms. DeJEAN: Absolutely. In the late 1670s a newspaper, which was one of the most-read newspapers in all of Europe, it's--the editor of this newspaper--his name is Jean Donneau de Vise--starts covering the fashion scene. And then for a few years he has the idea, which was totally revolutionary for newspapers at this time, he starts using engravings, engravings to illustrate what you had to wear that season so you have an outfit completely detailing everything that has to be done to have the look of the season.

MONTAGNE: And she's sitting on a couch and sort of presenting an image of the life one could live `if only.'

Ms. DeJEAN: Absolutely. It's--and that's what they quickly do. The first fashion plates, the very first, for a year or two, show people simply--women simply standing, and they have little bullets indicating `Here's the muff and here's how you wear it and here's the color it should be,' etc., because obviously it's all black and white. And then quickly they start selling a lifestyle. So here she is, she's relaxed and she's reading the fashion press.

MONTAGNE: There's a wonderful character that you begin the book with who is the--would appear to be the original celebrity hairstylist...

MONTAGNE: ...named Monsieur Champagne, and he is right out of the movie "Shampoo."

Ms. DeJEAN: Absolutely. A hairdresser so famous--there really are no women's hairdressers. The word--the whole vocabulary's created. It's the one we still use today, of coiffeur, for this guy Champagne. There were none before. It was considered indecent for a man to touch a strange woman's hair. And then Champagne comes on the scene. And he becomes so famous that--it's not a movie, but he has a play written about him and other people write satires of what goes on, so we have an enormous amount of information about his life. People would follow him around and beg him to do their hair, and he was capricious in a way that's really unbelievable. He was reported to have had affairs with some of his clients. He would insult people. He'd walk out in the middle of doing someone's hair. One of the famous phrases is, `With a nose like that, no one could make you look good.' All the attitude we think of today with the really famous stylists of the moment is there, once again, right in the beginning with Champagne.

MONTAGNE: Was there any single or even a tiny handful of things that came into being that made this all possible?

Ms. DeJEAN: Numbers of things--great craftsmen in many areas, so shoes, the transformation of making shoes. The kind of wild shoe culture we have today can begin then. Diamonds--there was a great French jeweler who made huge voyages to India. India was the only place in the world at that time with known diamond reserves. The voyager, whose name is Tavernier, returns to France in 1669. Louis XIV buys every single diamond. Until that time, there were virtually--there were very few diamonds in crown jewels all over Europe. The pearl is the gemstone of the Renaissance. And Louis XIV makes the diamond industry, and he would wear them. He had outfits made--the outfits were so heavy, apparently, the suits; he wore black velvet, all diamond-encrusted--that when he would go to a state dinner, he would wear the suit, and then after dinner he'd have to go and take it off because he couldn't stand it anymore because it weighed so much.

At the same time, the English went for--the next coronation of an English king, this is just after Louis XIV's death, the English have to borrow diamonds for the coronation.

MONTAGNE: So one could look around and see spiked heels, really high-priced lattes, full-length mirrors, champagne, of course--the list goes on of anything...

Ms. DeJEAN: Street lighting in Paris, the idea of having a romantic city at night; 1667 he gets the idea of creating street lighting and lights up the streets of Paris. And from all over Europe, they come to Paris to look at the lighting because no one can believe how it turns things around. So people go out to eat at night, go out for carriage rides at night, people walk in the streets at night. It's a reign during which sparkle becomes the major quality. And Paris is still the city that lives--in which all these experiences still live on in something of the same fashion so that the fashion industry, restaurants, you still go to Paris for all these same experiences and expect to find them there. And that's extraordinary, over 300 years of a reputation. No other city ever had this.

MONTAGNE: Joan DeJean is the author of "The Essence of Style." 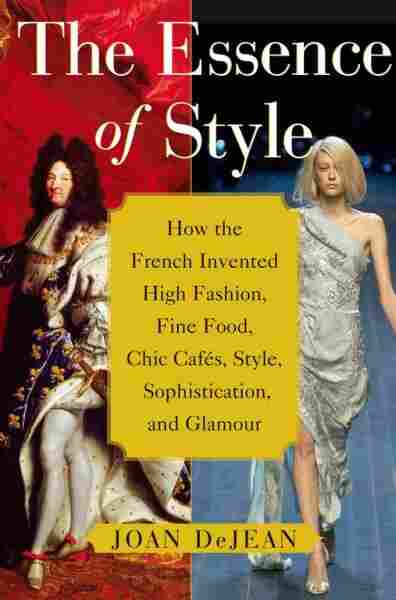 The Essence of Style