Accessibility links
Timeline: The Road to Hiroshima On August 6, 1945, the United States changed the face of warfare when it dropped an atomic bomb on Hiroshima, Japan. Here are the events leading up to the controversial attack.

Timeline: The Road to Hiroshima

Timeline: The Road to Hiroshima

Atomic Bomb by the Numbers

140,000 - Number of people in Hiroshima killed instantly or within months.

237,062 - Estimated total number of dead due to aftereffects, including radiation poisoning and cancer.

80,000 - Number of people estimated to have died in Nagasaki. 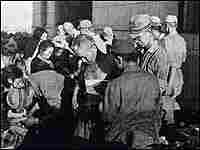 On August 6, 1945, the United States changed the face of warfare when it dropped an atomic bomb on Hiroshima, Japan. Three days later, U.S. forces detonated a second atomic bomb over Nagasaki, Japan, forcing an end to World War II. Here are the events leading up to that controversial attack.

President Truman announces the dropping of an atomic bomb over Japan by the United States during his national radio address on August 9, 1945.

California optometrist Dr. Mytsuo Tomosawa, a survivor of the Hiroshima bombing, describes the attack during a special Senate forum on nuclear war on March 22, 1982.

'The city was burning.'

May 7, 1945: Germany agrees to unconditional surrender, ending the war in Europe.

July 16, 1945: The United States successfully detonates the worlds first atomic bomb at the Trinity test site in the desert of New Mexico.

August 6,1945: The first atomic bomb to be used as a weapon is dropped on Hiroshima, Japan, at approximately 8:15 a.m. Nicknamed Little Boy, the bomb is released from the Enola Gay, a B-29 bomber piloted by Brig. Gen. Paul Tibbets. It explodes 2,000 feet above ground, killing 80,000 people instantly. One of the main arguments for use of the bomb by U.S. officials is that it would force Japan to surrender unconditionally.

August 9, 1945: An atomic bomb is dropped over Nagasaki, Japan, by a B-29 bomber piloted by Maj. Charles Sweeney. It explodes 1,540 feet above the ground. The original target for the bomb, nicknamed Fat Man, is Kokura, Japan. Due to cloud cover, the bomb is instead detonated over Nagasaki, the alternate location. It is estimated that 75,000 people are killed immediately.

August 9, 1945: Three days after the Hiroshima bombing, President Truman speaks to the nation in a radio address: The world will note that the first atomic bomb was dropped on Hiroshima, a military base. By this time, the United States had already dropped its second bomb on Nagasaki.