From 'State of Mind'

'Sittin' in the Middle'

Raul Midon is in good musical company these days. He provides the vocals for Herbie Hancock's cover of the 1984 Stevie Wonder hit "I Just Called to Say I Love You." And on Midon's debut CD, State of Mind, Stevie Wonder shows up to play the harmonica. 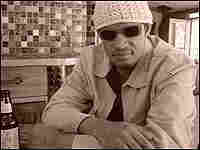 Midon's voice and compositions remind many of Wonder, and that's not the only common bond. Midon has been blind since birth.

The son of a professional dancer born in Argentina and an African-American mother, Midon grew up in New Mexico. Music came to him early, though he tried the drums before picking up the guitar. He went to college in Miami and worked as a background vocalist, then moved to New York City three years ago.

Midon tells Liane Hansen about his musical aspirations, his songwriting influence and a CD which covers a variety of genres, from jazz to folk and Latin influences.