Accessibility links
Health Care Woes Heavy at 'World's Longest Yard Sale' In Tennessee, Andrea Seabrook visits "the world's longest yard sale" -- and hears complaints about health care when she asks people how they see their lives in relation to the government.

In Tennessee, Andrea Seabrook visits "the world's longest yard sale" — and hears complaints about health care when she asks people how they see their lives in relation to the government. 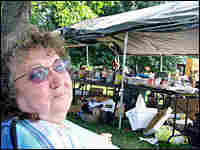 Melba Matis, 61, is worried about what will happen when her state health care benefits end this month. Andrea Seabrook, NPR hide caption

Members of Congress have abandoned Washington's summer swelter for the month of August. Some representatives and senators are off on junkets. Others are simply taking a break from work, and many are spending at least some time connecting with constituents to find out what citizens outside the capital's Beltway have on their minds. NPR reporters are fanned out across the country this month doing much the same thing, talking with Americans and asking about how they perceive the relationship of their lives with their government. NPR congressional correspondent Andrea Seabrook is driving across the country. This weekend she got an earful about health care when she stopped in Tennessee at the yard sale to end all yard sales.

It goes on for miles. The Longest Yard Sale In the World, as it's called, runs north and south along Highway 127 from Alabama, through Kentucky and Tennessee, almost to Ohio. Folding tables are packed with old Christmas decorations, plastic toys, cassette tapes, drinking glasses. Here in Crossville, Tennessee, 61-year-old Melba Mettis(ph) sits in a beach chair selling her assorted junk, or treasure, depending on your point of view.

Ms. MELBA METTIS (Yard Sale Participant): You just never know what they're going to buy. It's just whatever catches their eye, I think.

SEABROOK: I bought a salt and pepper shaker shaped like a toaster, and I got to talking to Melba Mettis about her life and her relationship with the government.

Ms. METTIS: That's a tale, and I think it's pretty sorry here lately, you know, especially with the TennCare stuff.

SEABROOK: TennCare is Tennessee's public health insurance program for people with low incomes. Melba Mettis is a diabetic. She's got asthma, emphysema and, she says, arthritis in just about every joint in her body. She gets a small Social Security check and now has to pay $70 a month to keep her federal Medicaid benefit, which pays for part of her doctors' visits. And with all her health problems, Mettis takes quite a few prescription drugs. But like hundreds of thousands of Tennesseans, she's just gotten an official letter telling her she's been dropped from TennCare.

SEABROOK: So what are you going to do?

Ms. METTIS: Lay down and die, I guess. I'll have to pay the 70-something dollars a month, so then that don't leave me much to live on. So I'll probably end up losing my home. I'm sorry. But, you know, it's bad. And they need to take into consideration, you know, there's a lot of people just like me.

SEABROOK: Just about every person I talked to at the yard sale says the same thing. The government is taking away their health care.

Across the road, a man sits by tables of T-shirts and colored glassware. His name is Roy Nabors(ph). He's 39 and when he thinks of the government he thinks about his heart.

Mr. ROY NABORS (39-Year-Old): I have pulmonary endarterectomy, which is a procedure--they go in and take blood clots out of your lungs. It was the first one ever done in the state of Tennessee. He did it in Nashville at Vanderbilt.

SEABROOK: Who did it?

Mr. NABORS: He helped me and everything, so I truly have faith in him from what he's done. And if he were to run for president or whatever, you know, I voted for him in the past and I'll vote for him in the future.

SEABROOK: Nabors' personal connection with Dr. Frist really doesn't have anything to do with Senator Frist's social policies. Nabors has other problems. He was laid off when Citibank closed its call center in Knoxville. And now he's having a tough time getting back on private health insurance.

Mr. NABORS: That's the hard part. See, anytime you have the pre-existing condition, and you may work with the company for so many years and then all of a sudden the company goes, you know--whether they sell out or whatever, then you're going to have to go find another company. And then if you've had a condition before then, lots of times you--it's hard to get health care again.

SEABROOK: Roy Nabors' mom, Beverly, leans against a tent pole listening. Then she says in the past what she calls government-run, socialized medicine always seemed like a bad idea. But now...

Ms. BEVERLY NABORS (Roy's Mother): Well, it's looking more and more pleasing for people that have to be on TennCare or on Medicaid or even Social Security.

SEABROOK: And Roy Nabors says more and more of the people he talks to are thinking this way. They're starting to realize their security could change in a heartbeat.

Mr. NABORS: You're going from working to not working, to insured to falling through that crack, and you're caught up in it. And people don't realize how delicate that is and how it can change in an instant for anybody.

SEABROOK: Many people I spoke to at the Longest Yard Sale say they feel particularly vulnerable. With smaller incomes, they're here trying to make some extra money. And across Tennessee, their problems are familiar. Almost half a million Tennesseans have lost their TennCare benefits, so it seems like just about everyone I talked to is looking to the government right now hoping it'll come up with some solution to their health-care problems. Andrea Seabrook, NPR News.