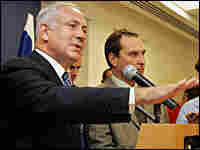 From NPR News, this is ALL THINGS CONSIDERED. I'm Jennifer Ludden.

Israeli Finance Minister Benjamin Netanyahu resigned today to protest Israel's upcoming withdrawal from the Gaza Strip. He charged that the pullout, set to begin August 15th, would create a base for Islamic terror in Gaza. Despite Netanyahu's resignation, the Israeli Cabinet gave its final approval today to the first stage of that pullout. NPR's Linda Gradstein reports.

According to participants in today's Cabinet meeting, Netanyahu arrived late. He said he intended to vote against the Gaza pullout and then put a letter on the table in front of Prime Minister Ariel Sharon. That letter contained his resignation, which takes effect Tuesday. A few hours later in a news conference, Netanyahu said he could not be a partner to a government that is threatening the security of Israel.

GRADSTEIN: `Gaza is becoming a base for Islamic terror,' he said. `Everyone sees this. Hamas is getting stronger and taking credit for what looks like our running away under fire.' Netanyahu said Israel is setting a bad precedent by pulling out of Gaza, and Israel is not getting anything in exchange for that pullback. Netanyahu said he has long wanted to leave the government but waited until his economic reform programs were on their way.

The most immediate reaction in Israel was on the Israeli stock exchange, which fell by more than 5 percent. Prime Minister Sharon issued a statement saying Israel's economic policy will continue. And hours after the resignation, Sharon appointed Vice Premier Ehud Olmert as interim finance minister in Netanyahu's place. Jewish settler leaders welcomed the move but said they wish it had happened earlier. Settler spokesman Yisrael Medad says it's too late to stop the Gaza pullout, which is scheduled to begin next week.

Mr. YISRAEL MEDAD (Settler Spokesman): At the present moment, the way Mr. Sharon is running the country, I don't think so. I think that he's very much determined that the first phase of the disengagement will carry through. I do not know what happens if terror will begin from the Palestinian side in Gaza during the expulsion process.

GRADSTEIN: However, Medad says, Netanyahu's resignation is likely to spark early elections in Israel, perhaps by next spring. And Netanyahu remains the settlers' best hope to unseat Sharon, who they fear is planning a pullback from much of the West Bank next.

Hirsh Goodman of the Jaffee Center for Strategic Studies says Netanyahu resigned now because he felt this was the best time to challenge Sharon for the leadership of the Likud Party.

Mr. HIRSH GOODMAN (Jaffee Center for Strategic Studies): Henry Kissinger once said that Israel has no foreign policy, just has internal politics. This is probably one of the greatest examples of that saying. Everything has not got to do with whether he thinks the disengagement is good or bad or whether he thinks there's going to be more terror or less terror. He's done it entirely--entirely--to position himself within the Likud Central Committee.

GRADSTEIN: It is that central committee that plays an important role in choosing the Likud's candidate for prime minister. And Netanyahu hopes that today's resignation is the first step in his becoming prime minister. Linda Gradstein, NPR News, Jerusalem.