Accessibility links
Fame Came Late for Buena Vista's Ferrer The lead singer of the music group the Buena Vista Social Club, Ibrahim Ferrer, has died at 78. He didn't become a star until a 1997 film based on the Cuban group's work drew international acclaim. He won two Grammys after he turned 70.

The lead singer of the music group the Buena Vista Social Club, Ibrahim Ferrer, has died at 78. He didn't become a star until a 1997 film based on the Cuban group's work drew international acclaim. He won two Grammys after he turned 70. 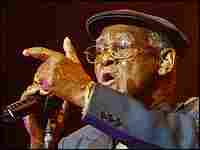 The music world lost another entertainer over the weekend, the "Buena Vista Social Club" vocalist, Ibrahim Ferrer. He died in Havana. Ferrer was living in obscurity until career was resurrected in the 1990s, as NPR's Felix Contreras reports.

Ibrahim Ferrer was 70 years old when his star finally ascended. In 1997, American musician Ry Cooder asked him to perform with a group of senior citizen musicians for a record he called the "Buenta Vista Social Club." That record and a film documenting the recording sessions lifted the Cuban musicians to worldwide fame. Ferrer followed that up with his first-ever solo album.

CONTRERAS: Ibrahim Ferrer said he was born, in 1927, practically singing and dancing. In a 2003 interview on NPR's "The Tavis Smiley Show," Ferrer explained through a translator that his mother was at a dance when she went into labor.

(Soundbite from "The Tavis Smiley Show")

Mr. FERRER: (Through translator) My mother was very pregnant and, in the jumping and dancing and all this great stuff happening at the party, suddenly my mom starts to feel the contractions. And, well, the little black one had to come out.

CONTRERAS: He began to sing professionally at age 14. Between 1950 and 1970, Ferrer sang with many popular orchestras. But by the 1980s, the classic Cuban sound was out of favor and Ferrer was out of the music business.

After the invitation from Cooder, Ferrer left his shoeshining job and returned to the stage. He said he took all the new attention in stride.

Mr. FERRER: (Through translator) Certainly, I'm in a better position than before. I live in a different neighborhood and a nicer house, you could say, but outside of that I'm the same person. I haven't changed. Ibrahim remains Ibrahim. I close my eyes, I open them, and I'm still the same.

CONTRERAS: In 2000, Ibrahim Ferrer won a Latin Grammy as best new artist for his work on "Buena Vista Social Club." Then, in 2003, he won another Grammy for his solo album, "Bueno Hermanos." Ibrahim Ferrer died shortly after returning from a European tour. He was 78 years old.

INSKEEP: Hard to forget that voice.