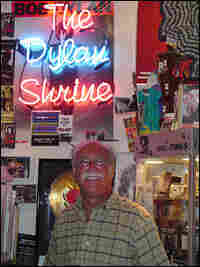 As the first part of a series about obsessive hobbyists, Art Silverman visits the Bob Dylan Shrine in Old Bridge, N.J. Mel Prussack, a semi-retired 64-year-old former drugstore owner, has crammed four decades of collection and creation into a private museum on the second floor of his split-level home.

Prussack has the music, the books, the movies and supplements all that with his own Dylan-related art. He also makes sculptures out of found objects that relate to Dylan lyrics.