Accessibility links
Common Intruders Threaten Galapagos Species Common species of blackberries, goats and red ants are endangering the survival of far rarer flora and fauna native to the Galapagos Islands. The dire effects of such an invasion were foreseen by Charles Darwin.

Common species of blackberries, goats and red ants are endangering the survival of far rarer flora and fauna native to the Galapagos Islands. The dire effects of such an invasion were foreseen by Charles Darwin. 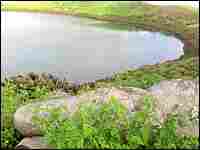 On the Galapagos Islands off the Pacific coast of South America, conservationists are waging a battle of man vs. goat. The goat is one of a number of species that have arrived on the islands. Goats, red ants, even berries are pushing out native species found nowhere else but on this isolated archipelago. NPR's Lourdes Garcia-Navarro has the second part of our series.

Make no mistake, there is a war taking place on the Galapagos Islands. It involves the regular tools of warfare, helicopters and guns, and then there are the dogs.

GARCIA-NAVARRO: Karl Campbell walks around a large kennel containing dozens of highly trained hunting dogs, located at the Charles Darwin Research Station, the main conservation and research body on the islands. Both the dogs and Campbell work on the internationally funded, multimillion-dollar Isabella Project.

Mr. KARL CAMPBELL (Isabella Project): The goal of the Isabella Project is restoring the ecosystems on Isabella and Santiago islands, devastated in the last few decades by feral goats.

GARCIA-NAVARRO: Conservationists say the project is the largest of its kind to ever take place. Goats arrived on the volcanic islands centuries ago. They were dropped of by fishing and whaling fleets as a means to ensure that fresh meat would be available to them for future trips. They bred widely and there ended up being possibly as many as a hundred thousand goats on Isabella, an Island which is the size of Rhode Island.

Mr. CAMPBELL: When they go into a feral state, they absolutely trash the place.

GARCIA-NAVARRO: Meaning they can reduce a forest to a lawn in a few years, leaving vulnerable animals like the Galapagos tortoise struggling to survive. On the island of Pinta, goats decimated the vegetation, killing off most of the tortoise species there. Only one remained, Lonesome George, who's been moved.

The Isabella Project has developed three main lines of attack against the goats. Those specially trained dogs which round them up, hunters who wage aerial assaults, shooting the goats from helicopters, and finally what the conservationists confess is an underhanded weapon--a so-called Judas goat, which has a tracking device placed on it.

Mr. CAMPBELL: Goats typically are gregarious. They like being in herds, and so they'll go in search of each other. So we utilize their biology, that trait, actually against them.

GARCIA-NAVARRO: Campbell has perfected that technique, using a kind of Mata Hari goat, a sterilized female with a hormone implant in her ear that puts her in a constant state of estrus, or heat.

GARCIA-NAVARRO: It's been a success story. Tens of thousands of goats have been killed. Now only 2 percent of the original population remain. But other battles are being lost.

(Soundbite of plant root being pulled up)

GARCIA-NAVARRO: Near the largest freshwater lake in the Galapagos, park ranger Gianni Arizmendi resentfully yanks out a root. These are the highlands of San Cristobal, the second-most populated island in the 13-island archipelago. The blackberry is everywhere. Its white spindly arms that sprout succulent fruit line the main road around the island. It's overtaken the areas where people farm and it's spreading to the national park, strangling native species. It seems no matter how many times it's pulled out, it grows back. Birds eat the fruit and spread the seeds. Arizmendi says that even small-scale eradication projects have not been successful.

Mr. ARIZMENDI: (Through Translator) The ...(unintelligible) and they work, and then they get back to the office and they feel that they've won in that area, so they move on to the next place. And they turn around and they see that the blackberry's back.

GARCIA-NAVARRO: Plants and mammals are not the only categories of invasive species here, either.

GARCIA-NAVARRO: A giant Galapagos tortoise hisses as visitors get too close to it.

GARCIA-NAVARRO: Galapagos is named after these reptiles, but their populations have been hurt in the wild by rats, pigs and goats. And even here in this captive breeding program, an invasive insect has meant that in the past two years, only one baby tortoise, named Genesis, has hatched successfully.

Edwin Jimenez(ph) looks after the tortoises.

Mr. EDWIN JIMENEZ (Tortoise Keeper): (Through Translator) We found four nests this year, but almost all the eggs were compromised because of problems with red ants in this area.

GARCIA-NAVARRO: Two quarantine officers check the bags of passengers traveling between the islands. People coming from the mainland are also screened. Humans are the main conduit for invasive species. Tourism is growing; a hundred thousand people visited the islands last year. The population of the four inhabited islands, which includes Isabella, is shooting ever higher. Scientists say the problem is only going to get worse.

But unlike island chains like Hawaii, the Galapagos still maintains 95 percent of its native plants and animals. Invasive species scientist Jill Key says they must be preserved.

Ms. JILL KEY (Scientist): We have a lot of species here that you won't find anywhere else. These things we are responsible for. I don't think it's acceptable just to say, `Oh, what's the use of that little tiny plant on that island? It doesn't matter if we get rid of it.' These things, they all have a role ecologically. They're things that we all--the human race is responsible for, so we have an obligation to protect them.

GARCIA-NAVARRO: In his book "The Voyage of the Beagle," detailing his youthful travels which inspired his theory of natural selection, Charles Darwin ended his chapter on the Galapagos with these prescient words: `What havoc the introduction of any new beast of prey must cause in a country.'