Accessibility links
A Hard-to-Kick Habit: Korean Barbecue Short Ribs Writer and editor Howard Yoon tried to give up red meat, much to his Korean parents' dismay. But the sweet and savory flavors of kalbi -- the barbecue short ribs of his childhood -- proved too difficult to resist. 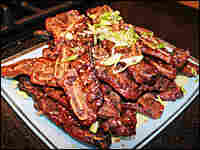 Kalbi -- or K--ean barbecue short ribs -- is s--prisingly easy to make once you understand the balance of sweet and savory flavors. Recipe and tips below Howard Yoon hide caption

During a college break, I arrived home to inform my parents that I was giving up red meat for good. I recited a carefully rehearsed list of ethical and environmental reasons, delivering each the way a spelling bee champ calls out the letters of a winning word.

Their reaction was typical for Korean parents -- at least my Korean parents -- to unwanted news. They fell deathly silent. Rather than discuss my decision, they avoided eye contact and continued as if I had not said a word.

I guess they were more baffled than anything else. For two people who faced hunger and starvation during the Korean War, they could not fathom why anyone -- especially their own son -- would willingly give up red meat. Food is food, and no argument about the Brazilian rainforests or methane in the atmosphere could change their deeply ingrained view of red meat. For them, meat was a delicacy served only on holidays and special occasions. As long as it was plentiful and cheap in America, it was going to be on our dinner table.

Howard Yoon is the creative director of the Gail Ross Literary Agency in Washington, D.C. He has written and edited numerous non-fiction books. His Boston Terrier Bailey is his No. 1 kalbi fan.

And the meat most commonly served at our table was the one dish I knew would be painful to give up: kalbi.

Kalbi is the signature dish of Korean cuisine -- the pinnacle of fine dining from my ancestral homeland and the reason why many Korean restaurants have gas grills built into each dining table. When I was a baby, my mother would spoon-feed me bowls of kalbi mixed with warm rice and water.

From then on, our family ate kalbi at least once a week, and by the time I reached high school, I was the designated kalbi griller in the family.

Made of beef short ribs, cut into thins strips and marinated with soy sauce, garlic, sesame oil, green onions and sugar, kalbi is grilled over a medium-hot flame and best served the way Korean restaurants do: cut into pieces right over the grill, usually with hefty kitchen shears, and then wrapped inside a fresh leaf of lettuce with a finger of steaming white rice, a dollop of spicy red bean paste (gochichang), a few slivers of raw or grilled garlic, and shredded strips of fresh green onion.

Kalbi is surprisingly easy to make once you understand the balance of sweet and savory flavors. Many Korean restaurants tend to serve their kalbi on the sweet side, perhaps to cater to an American sweet tooth. Other recipes I've seen recommend additional ingredients such as sherry or white vinegar, Asian pears or brown sugar along with white.

In my opinion, these are mere distractions to the main event -- beef, soy, garlic, sugar, sesame oil and green onions. That's it. If you let these ingredients stand out, you'll have a foolproof dish that will satisfy any meat lover.

And what happened to my college vegetarian days? My intentions were pure, but my will was weak. My red meat ban lasted until the end of the semester when I returned home for winter break and found a giant container of kalbi marinating in the fridge. Maybe my mom didn't hear me after all. Or maybe she knew sooner or later I'd fall off the no-meat wagon.

Regardless, the temptation was too great. I volunteered my services as grillmaster and soon found myself outside at the gas grill, a pair of chopsticks in my hand and plumes of smoke rising up from the beef and stinging my eyes. Tears of joy, you might say.

Combine the soy sauce, sugar, sesame oil and corn oil in a large mixing bowl. Add garlic and green onion and stir together. Put short ribs into large sealable freezer bag (you may need two). Pour marinade into bag and turn bag over several times to ensure all meat pieces are covered. Refrigerate for at least four hours, but preferably overnight. Turn bag at least once in the middle of the marinating process.

Heat grill to medium-high heat before adding the meat. Drain excess marinade off short ribs and grill them until medium, about 6-8 minutes. Sprinkle with toasted sesame seeds and chopped green onions. Serves 6.

* NOTE ON RIBS: Korean-style short ribs can be found at most Asian markets. The cut is called "flanken," a strange word that refers to a strip of beef cut across the bone from the chuck end of the short ribs. Most short rib recipes call for individual bones cut into thick pieces. Kalbi is unusual in that it calls for 3 ribs, cut lengthwise across the bones, so that you end up with a strip of meat about 8-10 inches long that has 3, 1/2-inch rib bones lining the top.

The grilling technique for kalbi is the exact opposite of grilling a big American steak. Kalbi is much more of a hands-on dish. Because of its thinner cut, the meat cooks faster and requires constant attention and turning over, which is why it is so much fun to cook it at the table with a group of friends.

Like most Korean meals, kalbi should be served with panchan, an assortment of side dishes that might include marinated spinach, cooked bean sprouts, salt-cured fish and of course the ubiquitous Korean side dish, kimchi, a spicy fermented cabbage or radish that people either love or hate.

Try kalbi once and you'll see what I mean about being hooked.