Accessibility links
Decades After L.A. Riots, Watts Still Suffers On a red-hot August night in 1965, the Watts neighborhood of Los Angeles exploded with racial frustration. But 40 years after a traffic stop sparked the Watts riots, which claimed 34 lives, little has changed. 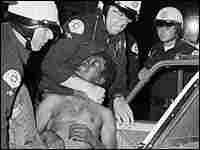 Original caption from Aug. 12, 1965: "Policemen force a rioter here into a police car during second night in a row of rioting. The rioters, led by a hard core of 300 hoodlums, were controlled by heavily armed police." Bettmann/CORBIS hide caption 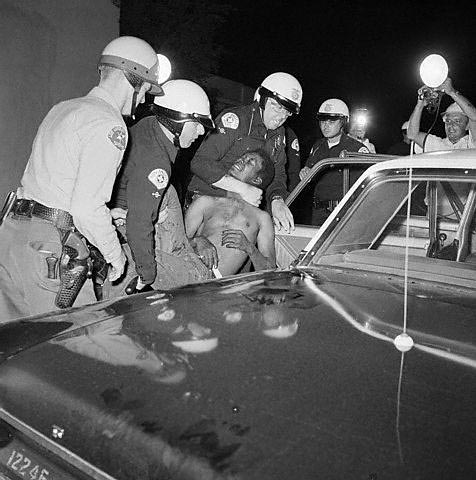 Original caption from Aug. 12, 1965: "Policemen force a rioter here into a police car during second night in a row of rioting. The rioters, led by a hard core of 300 hoodlums, were controlled by heavily armed police." 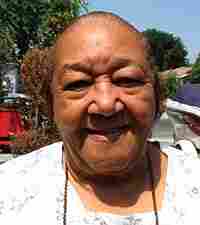 "Sweet Alice" Harris has been living in the Watts neighborhood for 46 years, and sees little improvement since the 1965 riots. Mandalit del Barco, NPR hide caption

On a red-hot August night in 1965, the Watts neighborhood of Los Angeles exploded with racial frustration. Six days later, 34 people were dead, hundreds more injured and a wide swath of South-Central L.A. was scarred with burned-out buildings and looted stores.

The unrest began with a routine traffic stop by CHP officer Lee Minikus. He arrested 20-year-old Marquette Fry for suspicion of driving under the influence, and things got out of hand when Fry's mother arrived at the scene and started yelling at the officer. A crowd began to form, and by the time Fry was booked, the riot was under way, sparked by rumors that the officer had beaten an elderly woman.

Forty years later, many area residents still remember those days. Some still term it a rebellion, not a riot. The official government report concluded the riots were rooted in discontent over high unemployment; poor housing and medical care; and bad schools. Relations with the police were at an all-time low.

Alice Harris -- known as "Sweet Alice" to her neighbors -- has lived in Watts for 46 years. She says things haven't changed much at all. "Everybody is tense -- no jobs, zero tolerance in the housing projects... people scared of the police," she says.

Tommy Jaquette, now a community activist and director of the Watts Summer Festival, was 21 years old in 1965, and a friend of Fry's. He says he knows what it was like to be a young black man in 1965, always getting harassed by white police officers.

"I knew the frustration, the hostility, and I knew the attitude of the police -- and it was payback time, for the most part," he says.

Police were ordered to shoot to kill, and 14,000 National Guard troops rolled in, complete with tanks. Businesses went up in smoke; most never returned.

After the riots, Watts finally got a grocery store and a medical center -- but mismanagement at the hospital threatens to close it down. The jobless rate is still high, and schools are still in bad shape.

Harris says if things don't shape up, things could turn violent yet again. "I don't want to be in another riot... I don't want children or grandchildren to be in a riot. It's dangerous."