Eric Johnson's guitar playing reflects the musical diversity of Austin, Texas, his hometown. Austin, along with his father, helped him develop "a real love for all different styles of music," he tells Scott Simon during a visit to NPR's Studio 4A. 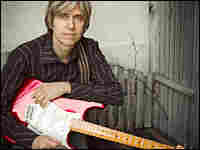 Those styles include country, blues, rock and jazz fusion. Johnson first began playing in public at age 13 and later was a session player for Carole King and Christopher Cross. After several albums, awards and at least two guitars bearing his name, Johnson became a respected and oft-imitated music veteran.

Johnson, who counts Jimi Hendrix, country guitarist Jerry Reed and Bob Dylan among his influences, isn't likely to mind being imitated. "I think the way you develop your own sound is you go through a process by which you imitate people... you form a collage of all these different players that you imitate [and] you form your own recipe," he says.

His latest album, Bloom, is a set of 16 songs divided by tone into three sections named for classical dance terms.