Listen
Richard Thompson, Back to the 'Front Parlour'

Richard Thompson, Back to the 'Front Parlour'

Richard Thompson grew up in post-war Britain with a wide range of musical influences from Les Paul to Louis Armstrong. Known for his exceptional guitar work, Thompson's latest release, Front Parlour Ballads, was recorded in his home studio. It is his first solo acoustic album in more than 20 years. 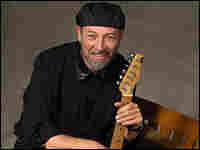 Thompson grew up listening to the music of Django Reinhardt and Les Paul, two of his father's favorites. He developed a style of his own, which helped him become a founding member of the Brit-rock band Fairport Convention.

In 1971, Thompson left the group and began a solo career. He also married Linda Peters, the singer who would help anchor a string of critically praised records with Thompson that included I Want to See the Bright Lights Tonight in 1974, Pour Down Like Silver in 1975 and the seminal Shoot Out the Lights in 1982.

While Richard and Linda Thompson ended their marriage and musical partnership in the 1980s, Richard Thompson kept on playing, on both solo records -- acoustic or with strings -- and collaborating with Fred Frith and a range of musicians. He maintained a steady touring schedule in the 1990s, playing shows either solo or with friends.

More recently, Thompson worked on music for a new documentary from director Werner Herzog, Grizzly Man. The film had its debut at the 2005 Sundance Film Festival.