Accessibility links
'Grizzly Man', a Dreamer Lost in the Wilderness Timothy Treadwell spent 13 summers among the grizzly bears of Alaska before one killed him. Film critic Kenneth Turan says director Werner Herzog has fashioned a riveting story of Treadwell's obsession.

Listen
'Grizzly Man', a Dreamer Lost in the Wilderness

Timothy Treadwell spent 13 summers among the grizzly bears of Alaska before one killed him. Film critic Kenneth Turan says director Werner Herzog has fashioned a riveting story of Treadwell's obsession. 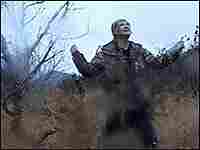 An amateur wildlife researcher, Timothy Treadwell, spent 13 summers among the grizzly bears of Alaska. In 2003, one of those bears attacked and killed him. The documentary "Grizzly Man" now looks at Treadwell's life and his almost mythical death. Here's Los Angeles Times and MORNING EDITION film critic Kenneth Turan.

"Grizzly Man" both shows and tells an astonishing story. It's a disturbing and provocative tale of obsession, bravado and self-invention that leaves you open-mouthed for all kinds of reasons.

TURAN: You will wonder at the wildlife footage Timothy Treadwell shot during the summers he spent camping in an area of Alaska he called the Grizzly Maze. And then you will wonder at the man. Treadwell was handsome, blond and charismatic. He styled himself as the lone guardian of the grizzly, someone who was convinced his love for the animals would protect him from their paws and claws. `They can kill,' he says on camera, `but it will never be me.' "Grizzly Man" is a story of both the powers and the limits of delusional thinking. It presents a man who felt that if you dreamed your dream hard enough, you could bend reality to your will, and who made that happen for years. The film is such a perfect fit for director Werner Herzog, a director always in love with obsession, that your first thought is that the filmmaker invented Timothy Treadwell.

Treadwell was not only exceptionally real, he left behind some 80 to 100 hours of video footage he shot himself, which make up about half of "Grizzly Man's" running time.

Mr. TREADWELL: As you can say, I'm just feet away. You just relax. You just relax. He's now moving away from me. I've now proven myself as being able to hold my ground and therefore earning their respect. This is Rowdy the bear and he's rowdy, he's getting bigger. And knew him from--he was a little dot a couple of years ago.

TURAN: The rest of the film is interviews with people who knew and worked with Treadwell. They examine the extent of his passion and his self-creation as well as providing a detailed look at the horrific circumstances of his death. To many, Treadwell crossed a line by getting too familiar with bears, by treating them, as one man says, like people in bear costumes instead of wild animals. Yet on the other side, it's hard not to be intrigued, as Herzog himself very much is, with Treadwell's perseverance and skills as a filmmaker. It's a tribute to the remarkable qualities of Herzog's film that we are left uncertain just what we think of Timothy Treadwell. Finally, as writer Nick Jans says in his book "The Grizzly Maze," it's hard to escape the spooky feeling that in the best 19th-century folk song tradition, the man did indeed die in the arms of his own true love.