Accessibility links
Novelty Reigns on Ethel Merman Revival CD A compilation of Ethel Merman recordings from the '50s, The World is Your Balloon, collects songs she recorded for Decca Records. Few are songs Merman herself made famous. 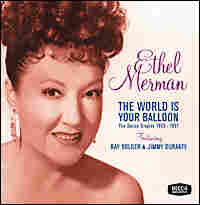 Merman had been a star for 20 years when these Decca songs were recorded. She got her big show business break in 1930 with a role in the George and Ira Gershwin musical 'Girl Crazy.' Decca Broadway hide caption

Ethel Merman's brass-band voice ruled Broadway from the 1930s on through the 1960s. In 1950 and 1951 she recorded a series of singles for Decca Records that covered novelty tunes and hit songs of the day.

Merman, the star of smash hits from "Annie Get Your Gun" to "Gypsy," went from working on the stage to working in the recording studio for the songs revived on Decca Broadway's new CD The World is Your Balloon.

Merman was known for her powerful voice, perfect pitch and clear enunciation. Irving Berlin and Cole Porter liked to write for her because, among other things, she could consistently deliver their lyrics to people sitting in the back row of a theater.

This recording also shows a gentler side, and plenty of Merman's exuberant good humor.

Ray Bolger, best known as the Scarecrow in The Wizard of Oz, and Jimmy Durante help Merman shape the light-hearted mood on many of the songs.

In the end, though, this new compilation comes down to one thing: Ethel Merman's voice.

She never took lessons and summed up her own talent modestly: "I get up and I sing."

Music From the CD

'Diamonds Are A Girl's Best Friend'

'The World Is Your Balloon'

'You Say The Nicest Things' (with Jimmy Durante)

Album
The World Is Your Balloon
Artist
Ethel Merman