Accessibility links
Despite Turmoil, Christians Place Faith in New Iraq Along with their neighbors, the Kurds, Christians were persecuted by Iraq's Baath regime and expelled from homelands in the north. But nearly a million Christians remain in Iraq, and many want their land back.

Christians comprise one of Iraq's oldest populations, and one of the country's most vulnerable minorities. Along with their neighbors, the Kurds, Christians were persecuted by the Baath regime and expelled from homelands in the north. Today, more than three million Iraqi Christians live outside Iraq.

But nearly a million Christians remain, and many want their land back. Efforts toward that end face many obstacles as Iraq struggles to create a government which allows effective power-sharing between a Shiite Muslim majority and the interests of Kurds and Sunni Muslims. Christians, a much smaller and weaker minority, hope for a just resolution, but fear they will again be shut out. 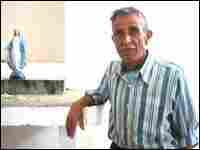