Accessibility links
Dog Days Never End at Seoul Cafe In Seoul, three stories above street level, a cafe caters both to people and to dogs. As the human clientele sip drinks and slurp noodles, the canine clientele eat dog food and just about anything else.

It's rare to find a cafe that caters to both people and dogs. The Bau House Cafe, however, is just such a place. It's in a trendy part of South Korea's capital, Seoul. Fifteen dogs actually live at the cafe, while countless four-legged friends drop by each week.

All the dogs are friendly, and the manager says it's not just dog owners who come by; the cafe is popular with people who can't afford a dog of their own.

This is a full-service cafe, with people sipping drinks and slurping noodles. There's no dog meat on the menu, though it remains a delicacy at some Korean restaurants.

Everything in the cafe is waterproof, even the paint on the wall. Rows of toilet paper hang down a column, along with a mop and towels. The vinyl floors are spotless.

Some customers drop their dogs off for a few hours while they run errands, or for longer stays when they go on vacation.

Even a Persian cat recently made an appearance, stirring some interest but no fights. These are well-trained and well-behaved dogs who reign over the cafe. 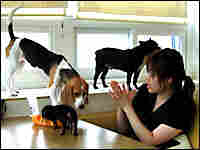 Dogs are not only allowed into the Bau House Cafe in Seoul, they are encouraged to make themselves at home. John Walker hide caption