Warning: getimagesize(https://media.npr.org/books/images/2005/sperling_75-3441c1846588fee37f8f3d03ec038fe32844c8e4.jpg): failed to open stream: HTTP request failed! HTTP/1.0 404 Not Found in /var/www/html/src/Views/CommonJsonldView.php on line 87
 Bellibones and Other Funny, Forgotten Words : NPR
Accessibility links
Bellibones and Other Funny, Forgotten Words Susan Kelz Sperling, author of Poplollies and Bellibones: A Celebration of Lost Words, talks about words that have been lost from the English language.

Susan Kelz Sperling, author of Poplollies and Bellibones: A Celebration of Lost Words, talks about words that have been lost from the English language. 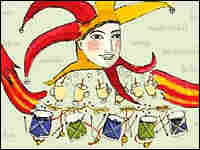 Susan Kelz Sperling loves old words, really old ones, words that have dropped out of general usage. Susan Sperling retrieves and collects them and puts them back into print. Her book, "Poplollies & Bellibones," is subtitled "A Celebration of Lost Words." Ms. Sperling is in our New York bureau.

Ms. SUSAN KELZ SPERLING (Author, "Poplollies & Bellibones"): Poplollies are sweet little darlings. It's a wonderful term for a person whom you have a special fondness for. Poplolly comes from the French term poupoulet(ph), `a sweet baby.' Many languages have the `P' sound for little puppies, little pooches, little poo-poos, little poo-pah. The British took a French term, poupoulet, and turned it into poplolly.

STAMBERG: And about when did that happen?

STAMBERG: Uh-huh, so that takes care of one part of your title. What does bellibones mean?

Ms. SPERLING: Also from a French term, belle et bonne, a good woman, a woman who is not only good-looking, but good in the heart. But notice again what the British did with a French term. A belle et bonne person became a bellibone, so that when you look at it, you kind of think, what's this got to do with my stomach, my belly or something?

STAMBERG: So how did they get so changed, then, from the French? Is it just that the Brits didn't have very good French accents or spoke very quickly?

Ms. SPERLING: I think the Brits had a double feeling about their association with the French. Sometimes they loved them completely; sometimes they wanted to annihilate them completely, and one of the best ways to do that is to take the language and turn it inside out. The English would take things that were French and turn them into their own parlance, or add their own special flavor to the pronunciation of words.

STAMBERG: Why do these words disappear? I mean, poplollies, bellibones--they seem like perfectly serviceable words.

Ms. SPERLING: They will disappear because other ones will take their place, or they may not have made it into some dictionaries that really got into general public use. A poplolly, a bellibone, certainly deserves to come alive today. It just didn't make it into the very big popularity contests.

STAMBERG: So these words, bellibones, poplollies, are sort of nice words for women, but there are plenty of old words that have not always been so kind. You give an example of one--help me pronounce it here--tearlearypuffkin(ph).

Ms. SPERLING: A tearlearypuffkin is just--the way you say--it sounds like a song, almost making a singsong sound for a woman who would not be thought of as very seriously. Tearlearypuffkin, a kind of person who has practically a no-brainer, a person who's a fizzgig, for example, who is full of fizz in her head instead of sense.

STAMBERG: You have found some lost words that would just delight children: learypoop(ph). Now can't you just see some four-year-old saying that?

Ms. SPERLING: Comes from the French term, le repippe(ph), which was the graduate student's hood, which eventually evolved into a tassel, a tassel that is worn on a mortarboard, a student's head.

STAMBERG: Do you think this is a good age for inventing words?

Ms. SPERLING: Yes. Blog is a real good one that's going full steam ahead. If you go back a few years, computers began with a word we don't hear that often, which is interface. The human is still there. You are interfacing, you are the one still in control of this machine in front of you. The influx of immigration that brings new words into our language is a wonderful thing. Words that are created are alive. They show that our language is constantly evolving.

STAMBERG: Susan Kelz Sperling; her last name is Baiter now. Her book of lost words is called "Poplollies & Bellibones." First published in 1977, it's just been reprinted by Konecky & Konecky Press, and they've combined it with another of her books, "Tenderfeet & Ladyfingers: A Compendium of Body Language."