Accessibility links
'Thin Man' on DVD: Highballs, High Spirits Warner Home Video has released all six Thin Man films from the 1930s and '40s in a boxed set of DVDs. Scott Simon talks with Christopher Orr, a contributing editor at The New Republic, about the movies. 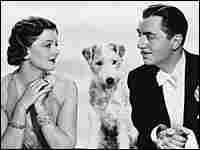 Loy, Asta and Powell in a publicity still for After the Thin Man (1936). Warner Bros. Entertainment hide caption

Its success may seem apparent now; but in 1934, W. S. Van Dyke's movie adaptation of Dashiell Hammett's The Thin Man was considered a dubious prospect in Hollywood.

After all, Hammett's novel was a dark, hard-boiled affair that didn't exactly seem ripe for light comedy. And the stars, William Powell and Myrna Loy, were best known respectively for their roles as villains and temptresses.

Scenes from 'The Thin Man'

Powell and Loy starred as Nick and Nora Charles, a married police detective and heiress who traded wisecracks and slugged down cocktails as they investigated the murder of an acquaintance.

Van Dyke's gamble paid off: the pair proved so lovable that the film spawned five more installments. Now all six films, plus a disc featuring documentaries about Powell and Loy, are being released in a DVD set by Warner Bros. Home Video. Scott Simon talks about the films with Christopher Orr, a contributing editor at The New Republic.