Accessibility links
Baghdad Torn By 'New Era' of Sectarian Strife A year ago, people who predicted that Iraq was headed toward a Shia-Sunni civil war were scoffed at by supporters of the U.S.-led invasion. But sectarian strife appears to be on the rise in Baghdad.

A year ago, people who predicted that Iraq was headed toward a Shia-Sunni civil war were scoffed at by supporters of the U.S.-led invasion. But sectarian strife appears to be on the rise in Baghdad. 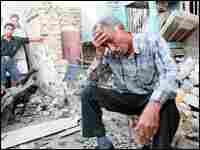 An Iraqi man sits in the rubble left after a car bomb outside his home injured two members of his family in Baghdad, Aug. 17, 2005. Reuters hide caption 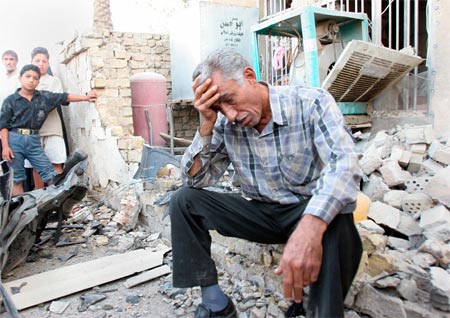 An Iraqi man sits in the rubble left after a car bomb outside his home injured two members of his family in Baghdad, Aug. 17, 2005.

In Baghdad, sectarian divisions used to be a taboo subject. Tensions among Sunni, Shia and Kurds in the Iraqi capital undoubtedly existed but few people talked about them. Now that's changing. Violence between Sunnis and Shias is growing in the city. Residents are receiving death threats. Sunnis are being told to get out of Shiite neighborhoods and vice versa. NPR's Philip Reeves has reported from Baghdad off and on since the US invasion and he tells us now about this disturbing trend.

It's hard to put your finger on it, but you can see it in their faces, in their hardened eyes, their fretful air of distrust and suspicion. Two years of violence have gnawed away at the people of Baghdad. Now there's something else, a kind of malice hanging in the hot dusty air. Sama(ph) is a Sunni Arab. He feels it clearly enough.

SAMA: Yeah. Yeah. With my own eyes here I see it and I hear it, too. In shops and grocery shop, when I do shopping, I hear, like, two Shia talking just by me, talking in Sudanese. `Look, what the Sunnis did.'

REEVES: Sama is 26. He's a sophisticated metropolitan, a former interpreter with the foreign media, though now he's unemployed. His best friend is Shiite. Two years ago he was optimistic about his country and his future. But sectarian hatred is quietly wrapping its coils around the Iraqi capital, and even Sama finds himself battling against his own prejudices.

SAMA: I feel guilty inside myself when, you know, when the TV or some of the Web sites--I see some operations or to hear about a big attack on Shiite group or when they--Shia officials escape assassination attempt. I really get angry and I wish if they have got him in that assassination attempt--some of Shiite leaders.

REEVES: For Sama these emotions are new and profoundly disturbing. In his case, there's a reason for them. The other day his cousin was murdered.

SAMA: He used to be an Imam for a Sunni mosque and he was walking back to his home after they finished the night prayers. He was shot with his brother, he died, his brother was badly injured. Eight bullets, two in his neck, two in his chest, two in his leg, you know.

REEVES: Sama says the injured man was rushed to the nearest hospital, it was in a Shiite neighborhood. Five family friends, including another of his relatives, went to try to save him by donating blood. Sama says they too were shot dead as they were leaving the hospital.

Ask Sama who did this and he says he can't be 100 percent sure, but what matters is what he believes, and he believes this was a sectarian attack by Shia against Sunnis. He thought about picking up a gun and setting out on a personal mission of vengeance. He came close to doing so.

SAMA: Very close. Only one reason is, you know, preventing me from doing that. I am more married and I'm waiting myself. If I was not married, I was to do it, believe me.

REEVES: Plenty of others have taken up arms.

REEVES: To see that, you only have to visit Baghdad's morgue. They can hardly bring in the new coffins fast enough. One wailing group of relatives has no sooner left than another group arrives.

Dr. ROE KASSIN (Coroner): (Through Translator) I can tell you frankly that the pressure has been double on us. Before the invasion we used to receive 10 bodies daily, now we're receiving 13 to 14 at least daily.

REEVES: In a grubby little office, an official stamps out the death certificates. The smell is so nauseating in here that staff advise visitors to smoke just to stifle it. The man with the stamp is kept busy. In July, 1,750 bodies were brought in; all shot. It was a record month. Some of the dead were accidents.

REEVES: Dr. Roe won't say who he thinks is doing the killing or why. Some of it is simply crime. But in Baghdad, it's hard to find an Iraqi who doesn't believe a fair number of the killings are the result of sectarian hatred.

The morgue's not the only place struggling to handle growing numbers. These days the waiting room in Dr. Al Hareed Abdul Hammi(ph) psychiatry clinic in Baghdad is always full. He says many of his clients have post-traumatic stress disorder. In fact, he says he's suffering from it himself. To his alarm, his patients are also becoming increasingly sectarian in their outlook.

REEVES: One hundred brides and 100 grooms gather in a mosque for a mass wedding in Baghdad's Sadr City. Shiite women are marrying Shiite men.

REEVES: It's been organized to help young impoverished couples. They're given gifts of rugs and money. And the Shia here are giving gifts to others, too--Shia, who are facing Sunni sectarianism. Achmed Ali(ph) is one of them. Achmed and his family have recently been forced to move out of their home in Talafar in northern Iraq.

Mr. ACHMED ALI: (Through Translator) In the beginning they attacked all Shiite houses and threatened them saying that if you don't leave you shall be attacked. I got such a letter.

REEVES: Achmed and his family left. He says others refused to cave in and paid the price.

Mr. ALI: (Through Translator) More than four families were killed. They were threatened at first but refused to leave. They attacked their house and killed them inside; the old and the young.

REEVES: Relations between Iraq, Sunni and Shiite Arabs have always been strained. Saddam and his Sunni-dominated regime systematically repressed the Shia for years and massacred many of them. But Iraqis say the sectarian tension has never run as high as this in Baghdad.

Dr. HAMMI: I would say that it is a new era in Iraq. It hasn't been like that at all, but nowadays, you know, because of the political situation they would lead you to talk about these things. So people are talking about these things nowadays because of what is happening here.

REEVES: Dr. Al Hareed, the psychiatrist, has had enough. Many Iraqis--those with sufficient money--have already left Baghdad to live in neighboring countries. He says he is seriously thinking of doing the same. Sama also wants to get out and move to Egypt.

SAMA: It's chaos. And for me personally, I'm losing my mind. I don't know what to do.

REEVES: He only sees the situation getting worse, perhaps turning to all-out civil war. Sama thinks it's already begun.

REEVES: Sama has an uncomfortable feeling about all this, an ominous suspicion that some Iraqis believe that more bloodletting has to happen, almost as if it's a phase the country has to go through to get better.

SAMA: And some people want the civil war to happen 'cause when the civil war happen they hope that after it ends everything will settle down. I mean, they think that it's like attacks we should pay to get rid of this situation. Because people are going crazy now.

INSKEEP: We're also following a story this morning in Jordan where there was a rocket attack today. It was at the Red Sea port of Aqaba and one of three rockets barely missed a US Navy ship that was docked there. No Americans were hurt, but a Jordanian soldier was killed.

This is MORNING EDITION from NPR News.