Accessibility links
'Six Feet Under' Ready for Final Curtain Sunday marks the last episode of the HBO show Six Feet Under. In five seasons, the series introduced viewers to the Fisher clan and their funeral business. The show's creator, Alan Ball, speaks with Susan Stamberg.

Sunday marks the last episode of the HBO show Six Feet Under. In five seasons, the series introduced viewers to the Fisher clan and their funeral business. The show's creator, Alan Ball, speaks with Susan Stamberg. 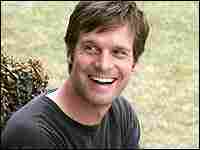 The Fisher family and the funeral home they run in California have become part of HBO viewers' routine most Sunday evenings for the last five seasons. This Sunday, the cable series "Six Feet Under" comes to an end. Many fans will be in mourning, including NPR special correspondent Susan Stamberg.

The notion of life, as it were, in a funeral home may not seem an obvious theme for compelling TV, but "Six Feet Under" has viewers gossiping around the water cooler about the fate of Nate Fisher, his mother Ruth, his wife Brenda, Brenda's dreadful mother, the psychologist--that whole messy bunch of them, all dreamt up by Alan Ball, who is the creator and executive producer of "Six Feet Under." He joins us now from Hanover, New Hampshire. So, Mr. Ball, is this the most dysfunctional family on television since Desi and Lucy?

Mr. ALAN BALL (Creator/Executive Producer, "Six Feet Under"): You know what? I actually don't view them as dysfunctional. I think dysfunctional and I start thinking addiction, abuse--those kinds of things. They're neurotic, but I do feel like whenever there is--whenever they need each other, if whoever is in need can actually step up to the plate and express that they need each other, the other ones are there.

Mr. BALL: So I certainly think they're not as dysfunctional as "The Sopranos."

STAMBERG: Yeah, yeah. Well, "Six Feet Under" has tackled everything: adolescence, widowhood, gay relationships, drugs, infidelity. It sure ain't "Leave it to Beaver," but the main thing it's about is death. Or is it?

Mr. BALL: Well, no, I think it's about life. I think death is a part of life, and I think the thing that appealed to me about this idea when it was first pitched to me was who are these people who live in the constant presence of death? Who are these people that we pay to face death for us? And how does that affect their lives? Now not ever having been a funeral director, I can only guess, but it seemed to me like it would actually throw life into sort of a sharper relief against the backdrop of constant death, and that's sort of the starting point that I took off from.

STAMBERG: But what was the thinking about killing off Nate Fisher, that lead character, so early?

Mr. BALL: Well, organically, I just felt like the show was leading towards Nate's death, because Nate, at the beginning of the series, was sort of like our way into this world, because he had been living away from it, he came back into it, and his journey has been one of moving towards grudging acceptance of his own mortality. In the first season, he sort of grudgingly took a job in the funeral home, which he had always not wanted to do. Then he discovered he had a potentially fatal condition. Then his wife died. And it's been as if Nate's whole journey has always been towards acceptance of mortality. And what is the final step of acceptance towards mortality? It's dying. And I didn't want to do it in the last episode, because you want to see the grief. You want to see the family grieve, and you also want to see the effect that Nate's life has had on those who love him.

STAMBERG: OK. Alan Ball, tell us what happens to the rest of them then. Give us a preview, and I'll bet you there are no happy endings or, anyway, tidy ones for this bunch.

Mr. BALL: Well, I can't tell what's going to happen in the show, but there is--you know, grief is a process that the only way out of it is through it, but when you come out of it, you are a deeper, richer person, and I think that's a process that we see happen to the Fishers. And there is certainly room for joy in the series, as much as there is room for tragedy, I think. I've always sort of felt that you can't have one without the other. You can't have light without shadow and vice versa.

STAMBERG: Thank you very much. Alan Ball is creator and executive producer of HBO's "Six Feet Under." The last episode of the series runs this Sunday. The cable series has won dozens of awards, and Alan Ball got an Oscar for his screenplay for the film "American Beauty." Thank you for your work, Mr. Ball.