Judd Apatow's original claim to fame was the TV show Freaks and Geeks. Now he's directing a motion picture — The 40-Year-Old Virgin — featuring a different sort of coming-of-age story. He tells Liane Hansen about it. 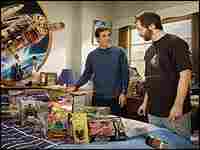 Steve Carell and a bearded Judd Apatow get a laugh out of character Andy Stitzer's collection of action figures on the set of 'The 40-Year-Old Virgin.' hide caption 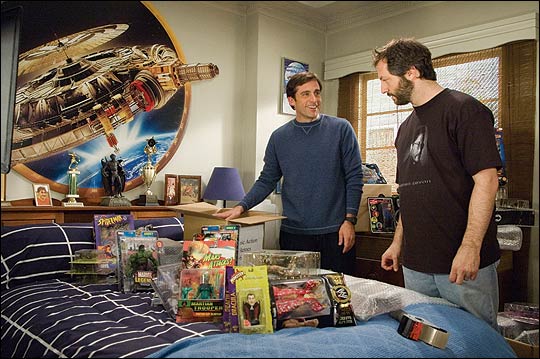 Steve Carell and a bearded Judd Apatow get a laugh out of character Andy Stitzer's collection of action figures on the set of 'The 40-Year-Old Virgin.'

Judd Apatow speaks geek, and he fluently translated it for television.

(Soundbite of "Freaks and Geeks")

Unidentified Actress: There she is.

Unidentified Actor #1: Whoa, she is beautiful.

Unidentified Actor #2: Can't believe she's gonna hang out with us.

Unidentified Actor #1: What if I'm asleep right now and this is just a dream, and any moment, Maureen and I are gonna make love?

Unidentified Actor #2: Maybe this is my nightmare.

HANSEN: Apatow's career hit gigahertz speed in 1999 with "Freaks and Geeks," a sitcom on NBC that lasted just one season. Judd Apatow's career moves to the big screen this weekend with the premiere of his first feature film, "The 40-Year-Old Virgin." He directed it and co-wrote the screenplay with former "Daily Show" correspondent Steve Carell. And joining us from our New York bureau is Judd Apatow.

HANSEN: Briefly set up the premise for us. I guess what's the line you gave in the pitch meeting?

Mr. APATOW: The line in the pitch meeting was, very simply put, Steve Carell plays a 40-year-old virgin. That's it. That's kind of all we had at that point.

HANSEN: He's the guy--a regular guy. He rides his bike, he has his own apartment and he has a job at an electronics store. And the only thing is he's just never consummated a relationship with a woman.

Mr. APATOW: Yeah, it's--I mean, it's basically as simple as that. Steve came up to me and he told me that he had this idea for a movie. And my head always goes to "Freaks and Geeks" land. I try to just do it credibly and think, `Well, how can I make this a real person?' So we went online and we found a lot of blogs and posts from real virgins, and they all were normal people, just maybe shy, afraid to take a chance, and that made us think that he didn't have to be that weird to be someone in this position.

And we wrote the script--this whole idea that your first instincts are good and should be trusted, so I try to write the first draft very quickly. And if I don't judge myself, interesting things happen in the writing, and then later I try to fix it up.

Mr. APATOW: And I found that has really changed how I approached all of my work. And so we'll right some really crazy stuff in that first draft and most of it winds up surviving.

HANSEN: This is unabashedly rated R. I mean, this film, in many ways, is--I mean, it's potty-mouthed; it's gross-out. That's the point, right?

Mr. APATOW: Well, it was really fun to make an R-rated movie, and I'm all for being dirty if the filmmaker's heart is in the right place. I don't like mean-spirited comedy. I mean, I don't like mean-spirited anything, but I think you can be very dirty if you like the characters and their intentions are basically good. So once we realized that, then we just went bananas. And Seth Rogen, who works in the stockroom with his character, Andy--we realized very early on that the more disgusting he was, the more shocked Steve Carell would be and the more you would like Steve that he's stuck with all these dirty guys telling all these sex stories, and then maybe like Steve. So we just kept pushing it.

Mr. APATOW: And we did push it too far, and there's a lot of stuff that didn't make the movie--that we'll probably chuck on the DVD so people can see it--that was just so rough and so over the line, but funny in a different way, but not appropriate for our story.

HANSEN: We have a scene--it's more of a G-rated scene--with Seth Rogen as Cal, and he's helping Andy, Steve Carell, clean up his apartment before a date.

Mr. STEVE CARELL: (As Andy) You guys, she's picking me up in an hour.

Mr. SETH ROGEN: (As Cal) Wait, wait. She's picking you up from here?

Mr. ROGEN: (As Cal) Why?! Seriously, man. I mean, look at this place, man. You gotta see this through the eyes of a woman, you know. What is she gonna think when she comes in here? `Oh, look! He's got a billion toys.'

Mr. ROGEN: (As Cal) Is that the Six Million Dollar Man's boss?

Mr. CARELL: (As Andy) That's worth a lot of money. That's much more valuable than Steve Austin.

HANSEN: I love the idea of the action figures and the fact that Andy has kept them for so long in their original condition. I mean, this is almost the required set for any kind of geek character. And with this setup, what did you have to do to make sure that the characters and that the plot and the story actually contained multi dimensions rather than have it completely revert to meaningless slapstick?

Mr. APATOW: Well, I'm trained by the people that I have worked for, like Garry Shandling, to try to make the characters real. So there's no situation where I don't think every character shouldn't be multidimensional. So I also work with the actors a lot to do that in long rehearsals. I don't assume that my writing is going to be strong enough, so I always do a really long rehearsal and I let them improvise a lot. So a lot of the colors come out because the actors are really allowed to take control of their characters and add as much as they'd like when we're shooting. But that part is the most fun for me.

The thing I'm most proud about in this movie is that everyone is funny. It's not that Steve Carell is funny; there's about seven different people in the movie who all kill in different moments, and it's pretty rare. In most, you know, modern comedies, one guy is killing and everyone else is serving that guy. So I love the fact that the entire group of people is scoring.

HANSEN: Is the story, do you think, though, a parable about love and about sex? What are the messages you think that are being--that you're transmitting in this?

Mr. APATOW: Well, the message of everything I do is, `Don't be a jerk.' I thought a lot about what the common denominators of my work, and it's generally don't be a jerk and just try to be a good person, and those are the people that I root for. When I wrote--you know, we were talking about "Freaks and Geeks"--you know, Paul Feig always talked about how the show wasn't about winning; it was about how you handle losing and how you connect with your friends through the hard times. And I always find that to be, you know, the type of story that I like. I don't like writing for strong, handsome guys who win the day or protect the people. I'd rather write about someone getting beat up on in some way, physical or emotional, and how they get to a better place.

So in a movie like this, I'm trying--you know, this isn't the funny part, but I'm in one way trying to say that even the people you find odd might turn out to be great people if you ever paid attention to them. And I'm also trying to say that it's--you know, it's worth taking a chance in life. You're going to miss out on a lot if you're so insecure that you don't take some chances and possibly get rejected. So it's--I think it's like the Tour de France for virgins. This movie will push virgins to take chances and live strong.

HANSEN: Writer-director-producer Judd Apatow co-wrote and director "The 40-Year-Old Virgin," which opened this weekend. He spoke to us from our New York studios.

Thanks a lot, Judd.

Mr. APATOW: It was a pleasure.

(Soundbite of "The Waiting")

HANSEN: You can hear more of the interview with Judd Apatow and listen to reviews of "The 40-Year-Old Virgin" at our Web site, npr.org.

(Soundbite of "The Waiting")