Accessibility links
Arab-Israeli Orchestra Makes It to Ramallah For three years, a group of Israeli and Arab musicians have performed with the West-Eastern Divan Orchestra. Now they will play for the first time in their home region. Conductor Daniel Barenboim tells John Ydstie about Sunday's concert in Ramallah.

The Birth of the Orchestra

The hope of peace through separation is driving Israel's pullout from Gaza. But for some time a group of young Israeli and Arab musicians have sought to foster peace together. They're members of the West-Eastern Divan Orchestra, a project that grew from the friendship of conductor Daniel Barenboim, an Israeli citizen, and the late Palestinian scholar Edward Said. 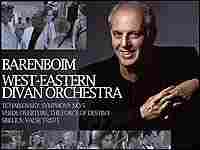 Daniel Barenboim, pictured on the cover of the CD, conceived the orchestra with the late Edward Said. Warner Classics hide caption

Earlier this month, the orchestra released its first recording. And Sunday night, in Ramallah, the musicians will perform for the first time in its home region, after three years of touring abroad.

Barenboim tells John Ydstie about the extraordinary timing of the concert and the challenges of bringing the musicians together.