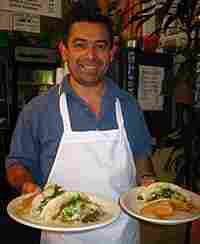 Summer's winding down, which means less time outdoors to sample the delights of the beach, the woods or the street, specifically street food. We sent our crack team of reporters out to find the ultimate street food in their towns. First up is NPR's Karen Grigsby Bates in Los Angeles.

Chicago has Polish hots and bratwurst; Philly has cheesesteaks and soft pretzels; LA has tacos. Tacos are the universal quick meal here. They transcend age, ethnicity, income and neighborhood. They come in every type. You can get highfalutin ones stuffed with shrimp and lobster. You can get kosher ones, vegetarian ones, down-home ones made with goat or tripe. It's all good.

We're here in Hollywood to check out Tere's Mexican Grill. It has received plaudits from both the Spanish-language press and the gringo LA Times as having fabulous Mexican food, so we're stopping to talk with the proprietor, Roberto, and his wife, Tere, to see what goes into their tacos.

BATES: And what part of Mexico are you from?

BATES: And what kind of tacos are you known for down there?

Unidentified Man: I'm pretty certain we have one of the best tacos in town because whoever tries our food keeps coming back.

BATES: And that seems to be true. The tiny restaurant has a number of people who identify themselves as repeat customers, like this one who drove in from the suburbs for lunch with her two young girls.

VICTORIA (Customer): My name is Victoria, and we're here just visiting and she loves it. That's why we're here.

BATES: Why does it seem like all of Los Angeles is so fond of tacos?

VICTORIA: I don't know. That's a good question. You know, I'm Mexican, so I assume maybe because it's right at the border, you know, three hours away and, you know, that's what they sell over there, like, in TJ, and so they bring it here, I think. I'm not sure. I mean, we just love it. I don't know. If I go somewhere, it has--they have to be really, really good. This is the place that I eat from. But I don't eat just regular--just tacos just from anywhere.

BATES: OK. Enough with the talking about tacos. I ordered a couple to see what all the fuss was about. Tere Melgar brings a plate with two, one carne asada, the marinated beef she and Roberto are so proud of, and another with grilled pork. The meat in both is tender and flavorful. The homemade tortilla is soft, dense and chewy. And it's all nicely offset by the bright acidity of chopped tomatoes, crunchy onion and cilantro. No quiero Taco Bell.

This is amazing. New York, Miami, eat your hearts out.

This is Mike Pesca in New York. On 50th Street in Manhattan, a row of 11 food carts diagonally across from Radio City Music Hall tell the story of street food in New York. Grilled lamb in gyros, a fruit stand, shake shack, two generic pretzel/hot-dog carts, ice cream, Philly cheewe steak--that's C-H-E-E-W-E--burritos, and another grill, this one frying up lamb and chicken. Here Dwayne McIntyre(ph) feels emboldened enough to place an order, if only to break up the monotony of Burger King and McDonald's.

Mr. DWAYNE McINTYRE (Customer): I mean, it ain't the best place, a lot of grease, you know. You gotta watch your cholesterol and all that.

PESCA: The eleventh cart is what makes this row exceptional. Daisy May's barbecue serves chili named best in the city by New York Magazine, and also pulled pork, chicken sandwiches and even chilled gazpacho. At high noon the line winds past the other carts and, with recent construction cutting the width of the sidewalk in half, the crowd grows ravenous. Weld Gowally(ph), the lone man in the chili cart, feels the heat.

Mr. WELD GOWALLY (Food Cart Vendor): Yeah, around this time we get busy. There's like a long line. It's too much. Everybody got patient for the line because you want to get some food--good food for him, you know.

PESCA: But if you wait out the noonday rush you wind up like this customer, Aaron.

AARON (Customer): How about the Texas chopped brisket?

PESCA: Told that his entree choice has come down to one, Weld presents a giant leg of turkey.

Mr. GOWALLY: It's not regular size.

AARON: All right, let's have that.

AARON: I kind of did go for it because it was a giant turkey leg and it seemed like a fascinating thing to bring back to the office.

PESCA: Fascinating and delicious, if the rest of Daisy May's food is an indication. Daisy May's owner and chef, Adam Perry Lang, studied French cuisine under one of New York and the world's top chefs, Daniel Boulud. He has a main Daisy May's restaurant, which only offers takeout, nine street carts--five are currently deployed throughout the city--and gigs at other restaurants and restaurantlike environments, such as an upscale strip club where he is the executive chef. He says chili from street carts isn't so different from haute cuisine because both are about pleasing palates.

Mr. ADAM PERRY LANG (Chef): I didn't really want to try to appeal to every person, but I knew I would because I've really put my faith into quality and keeping to real, authentic base and not try to use any bells and whistles with it. It's really an honest recipe.

PESCA: Honest, maybe, but chili and barbecued pork don't come to mind as the most authentically New York cuisines, but they are tasty. And when the food is created by a guy from Long Island trained in French cooking, ladled out by an overwhelmed Egyptian and craved by hundreds of New Yorkers of every stripe, that vat of chili becomes a veritable melting pot, making it a quintessentially New York dish. Mike Pesca, NPR News, New York.

I'm Eric Weiner in Miami. Here the most popular street food isn't really food at all. It's coffee, Cuban coffee, and it's different from any coffee you've ever had before. Joining me is Juan Martinez, a certified public accountant and a connoisseur of Cuban coffee.

Mr. JUAN MARTINEZ (Coffee Connoisseur): Well, it's stronger than other coffee, much more concentrated, sweeter, really has a kick to it--a concentrated kick to it. But it's also the experience of drinking Cuban coffee. It's usually a very social thing, usually have a bunch of friends together. You're talking, whether it's getting it at a window in the street or whether you're making it at home, you know, it's--there's a big social element attached to it--to the whole preparation and getting it.

Mr. MARTINEZ: That's the other thing you don't get at Starbucks. If you charged somebody 2 bucks for a cup of coffee, I mean, they would--there would be an outrage in Miami. So...

WEINER: I notice that the cup we're drinking here is quite small, but it's potent. I mean, this is strong stuff.

Mr. MARTINEZ: It's like Cubans, you know. We're potent and we're highly concentrated.

WEINER: So this is basically a small cup full of caffeine and sugar?

Mr. MARTINEZ: Yeah, all the important things in life. What you get in the street is a little bit different than what you're going to make at home because here the coffee tends to be more sugary--more syrupy, I should say, because of the fact that you're not mixing the sugar outside of the coffee. So--but, all in all, I think it's good. What do you think?

WEINER: I think it's not bad. It's a bit strong for me. What could I order next time if I wanted something not quite as explosive?

WEINER: That's a bit wimpy, though, isn't it?

WEINER: OK, OK. It'll be a cortadito for me.

More to come on DAY TO DAY from NPR News.