Accessibility links
Israel Finishes Withdrawal from 25 Settlements Israeli troops and police complete the evacuation of 21 settlements in the Gaza Strip and four in the West Bank. Troops have already begun demolishing settlers' homes in Gaza prior to handing the territory over to the Palestinian Authority in a few weeks.

Israeli troops and police complete the evacuation of 21 settlements in the Gaza Strip and four in the West Bank. Troops have already begun demolishing settlers' homes in Gaza prior to handing the territory over to the Palestinian Authority in a few weeks. 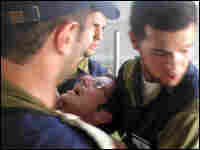 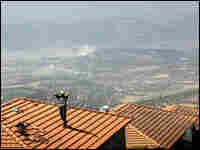 A man stands atop the roof of one of the last West Bank settlements to be cleared Tuesday. Reuters hide caption

Israel has completed the withdrawal of thousands of settlers from Gaza and from two small settlements on the West Bank, Sanur and Homesh. The last settlers there and their supporters were removed today.

BLOCK: NPR's Mike Shuster spent the afternoon in Homesh, and that's where he joins us from now.

Mike, tell me please where you're standing and what you see.

Well, I'm standing right in the middle of the settlement of Homesh. Actually, I'm standing right above two religious buildings that were the center of the struggle over Homesh today. The very small synagogue, actually sort of a synagogue made out of a trailer, and a small building that they call the yeshiva--both had several dozen young men barricaded inside, and there is razor wire around the roof of the yeshiva. Just a little while ago the street was filled with troops and police and rabbis, who had come to try to persuade those who had barricaded themselves inside to leave. And it was a struggle all afternoon. Eventually the police had to take them out one by one, carrying them out. But now it's quiet. In fact, this settlement has been evacuated. There are no longer settlers here. It's empty.

BLOCK: The Israeli army had been expecting a lot of resistance from these West Bank settlements, violent resistance. Did that materialize? How strong was the resistance there?

SHUSTER: It certainly wasn't as strong nor nearly as violent as the Israeli army has suggested in the last couple of days. They had put out reports that some of the people here had been stockpiling weapons. And, in fact, there were a couple of violent confrontations between some of the residents and some of the resisters and the police yesterday.

When the troops came in this morning, there was a good deal of resistance, though. They set cars on fire. They lit fire in the roads. They burned barricades. They threw trash in the streets, anything they could to impede the progress of the police and the troops. And then there was a good deal of fighting--or, let's say, struggling--when finally they were carried out, particularly the young women. The young women in a building--in the house that was the last to be evacuated just fought and fought and fought, many of them did, before they were carried and put into buses and taken away. So I'd say the resistance was very aggressive here, but the violence that had been predicted did not end up playing out.

BLOCK: Now do you know, were the people who were resisting actually residents of this settlement, or were they people who'd come in from the outside?

SHUSTER: Most were people that had come in from the outside. In this settlement, there were only an estimated 20 settler families that remained for this day, but there were maybe as many as 600 people here when the police and the troops finally came. So most of them were resisters from the outside, many from other West Bank settlements, possibly some from the Gaza settlements that had been evacuated over the last week. They had come here over time. They built their defenses. They watched the Gaza evacuation and adjusted their tactics to what they saw. So it was jam-packed when the police came.

BLOCK: Now, Mike, now that this disengagement is complete, these houses in the settlements in the West Bank are supposed to be demolished. Is that under way?

SHUSTER: No, it's not under way, and I don't think it'll be under way for a little while. It's under way in Gaza. The bulldozers came in right away and started knocking down homes. Gaza, in particular--they don't want it to be reoccupied because eventually, you know, they'll pull the troops, all the troops, out of Gaza as well and leave it to the Palestinians. That should take place in about a month. Here, the troops will remain. This is still a partially occupied territory. There's a significant Israeli military presence in the area, and they'll be able to keep this place from being reoccupied. They'll patrol it regularly, I expect. And demolition, if it takes place, probably will take place a little bit down the road.

BLOCK: And all of this, Mike, is happening well ahead of schedule.

SHUSTER: Extraordinarily well ahead of schedule. Before this all started, Israeli authorities thought that this would go into September. I don't think anyone had an idea that this would wrap up effectively in less than a week and a half.

BLOCK: NPR's Mike Shuster speaking with us from the now evacuated settlement of Homesh in the West Bank.

Mike, thanks very much.