Accessibility links
Cancer Claims 'To Kill a Mockingbird' Actor Peters Actor Brock Peters dies of pancreatic cancer at age 78. He is best remembered for his heartbreaking performance as a black man falsely accused of rape in the Deep South in the 1962 film To Kill a Mockingbird. 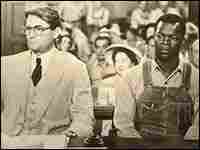 LOS ANGELES (AP) -- Actor Brock Peters, best known for his heartbreaking performance as the black man falsely accused of rape in To Kill a Mockingbird, died Tuesday at his home after battling pancreatic cancer. He was 78.

Peters was diagnosed with the disease in January and had been receiving chemotherapy treatment, according to Marilyn Darby, his longtime companion. His condition became worse in recent weeks.

He died peacefully in bed, surrounded by family, she said.

His long film career began in the 1950s with the landmark productions of Carmen Jones in 1954 and Porgy and Bess in 1959.

In recent years, he played Admiral Cartwright in two of the Star Trek feature films. He also appeared in numerous TV shows.

He was perhaps best known for portraying accused rapist Tom Robinson, defended by Gregory Peck's Atticus Finch in the 1962 film To Kill a Mockingbird.

Peters paid tribute to Peck after he died in 2003.

"In art there is compassion, in compassion there is humanity, with humanity there is generosity and love," Peters said.

"Gregory Peck gave us these attributes in full measure. To this day the children of 'Mockingbird' ... call him Atticus."

Peters recounted how shortly before he was to start filming, he was awakened early on a Sunday morning by a phone call from Peck to welcome him to the production. He was so surprised, he recalled, that he dropped the telephone.

"I worked over the years in many, many productions, but no one ever again called me to welcome me aboard, except perhaps the director and the producer, but not my fellow actor-to-be."

In May, Peters was on hand as Harper Lee, the reclusive author of To Kill a Mockingbird, made a rare step into the limelight to be honored by the Los Angeles Public Library.

Among Peters' other films were Soylent Green, The L-Shaped Room and The Pawnbroker.

In a 1985 story by The Associated Press on blacks in the movies, Peters said there had been a string of recent hits involving blacks, but "I have been here a long time, and I have seen this cycle happen before. I'll wait awhile and see if this flurry of activity leads to anything permanent."

His accolades include a National Film Society Award, a Life Achievement Award from the Screen Actors Guild, and a Tony Award nomination for his performance on Broadway in Lost in the Stars.

Peters was a widower and has one daughter, Lise Jo Peters.