Accessibility links
Hip-Hop Artist Madlib, Man of Many Names In the world of English-language hip-hop, some rappers use nicknames. But one Los Angeles musician creates entire alter egos. Rapper and producer Otis Jackson, Jr., has recorded under the names Madlib, Malik Flavors, Quasimoto and his real name.

In the world of English-language hip-hop, some rappers use nicknames. But one Los Angeles musician creates entire alter egos. Rapper and producer Otis Jackson, Jr., has recorded under the names Madlib, Malik Flavors, Quasimoto and his real name. 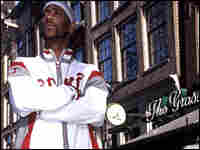 In the world of hip-hop, some rappers use nicknames. Here in Los Angeles, one musician creates entire alter egos. Rapper and producer Otis Jackson Jr. has recorded under the names Madlib, Malik Flavors, Monk Hughs and his real name. Otis Jackson's most unusual splinter personality is the helium-voiced Quasimoto. Quasimoto's CD "The Unseen" was hailed by critics when it came out five years ago. Oliver Wang has equally high praise for the new "Further Adventures of Lord Quas."

Quasimoto is better heard than described.

Mr. OTIS JACKSON Jr.: (Rapping as Quasimoto) Smoking on the trees at a hundred degrees. Never touch the breeze. This is sticky green leaves. Put it in the dutch. It gets stuck on yo touch. Whoa. Pack it in the bong, last long, have you on fresh. (Coughs) Light it up. Role it. Pass it around.

WANG: It's not enough to say that his main preoccupations are weed and old records, nor that his high-pitched lyrics make him sound like Alvin and the Chipmunks in Puma sweats and shell toes. The magic of Quasimoto is how he allows this doppelganger's originator, Madlib, to creatively express himself in ways that a conventional rap album simply can't.

Mr. JACKSON: (Rapping as Quasimoto) How about a little change, pretty please? OK. Hi, I don't really have none, bro. Oh, I see. No. Hey, Mr. Incredible Hulk, Corona, Heinekens, Heinekens, bloody mary, martinis, martinis, Grey Goose vodka ...(unintelligible) moonshine, Johnnie Walker, champagne, brandy, randy, red or white wine. Do you mind showing a little Christian kindness to me 'cause--I could sure use a taste. I ain't got nothing to hide. You could ask the doctor. I'm a serious case. Come on, please. Come on, Bro, help me get that taste. It's a medical emergency, as you can see. I ain't no addict. Whoever heard of a junkie as old as me? ...(Unintelligible) anything.

WANG: This is not an album full of market-tested songs, catchy hooks, club cuts or street anthems. Instead, think of it as a secret 68-minute wire tap into a fervent imagination. In Freudian terms, Quasimoto is clearly Madlib's id, unleashed into the world, moving impulsively and unpredictably. Accordingly, the album's rhythms follow in sudden lunges and dramatic lurches.

Mr. JACKSON: (Rapping as Quasimoto) Lose all your money or double up. Fall off or bubble up. Break a number one on the pop charts, or keep it real, dropping sound like art. Damn, I'm broke. Going wood in the hood and getting Grammys, coming like Neptunes or Prince Jammy's. Being yourself or sounding the same, it's all part of the game. We're all players of the game. Yeah.

WANG: There are no deep, personal revelations here, no catchy, clever punch lines to memorize. What's impressive is how Madlib is able to orchestrate these bizarre but fascinating internal dialogues spoken through a cacophony of voices, most of them his. There's Madlib's own solemn baritone.

WANG: Then Quasimoto's squeals and screeches.

Mr. JACKSON: (Rapping as Quasimoto) Lord Quas laying back like I'm paralyzed. The ...(unintelligible) got me looking like there's a fire in my eyes. Trying to find a better way to cook ...(unintelligible) ramen, but there ain't one. But anyway, I still got the munchies.

WANG: And there's the gravelly voice of playwright and filmmaker Melvin Van Peebles, whose recorded monologues have a habit of finding their way into Quasimoto's songs.

Mr. MELVIN VAN PEEBLES: Let me lay this on you, friend.

Mr. JACKSON: (Rapping) I wonder why. 'Cause it ain't nothing new.

Mr. VAN PEEBLES: ...(Unintelligible) been doing it before me and you.

Mr. JACKSON: (Rapping) ...ain't nothing new under the sun. It seems every spring I give myself that quiz. Yeah.

Mr. VAN PEEBLES: Get the same old answer every year. Chippin'. Chippin'. That's all that life is.

WANG: There's more than a touch of Marshall McLuhan's old adage, `the medium is the message,' woven in here. After all, what's brilliant isn't what's said so much as how it's said. The stutter-step pace of the album, the frenetic beats that Madlib splices in loops, the deftly inner-woven snippets of found sound that randomly pop up. Compared to the hyper-strategized formulas of other hip-hop albums, "The Further Adventures of Lord Quas" isn't a tidy package, neat but inert. Through his alter ego, Madlib puts his creative process on display as a cackling stream of consciousness that only relents long enough for you to catch your breath before plunging you back into the murky, giddy depths of his psyche.