Accessibility links
'To Kill a Mockingbird' Actor Brock Peters Allison Keyes offers a remembrance of actor Brock Peters, who died Tuesday in Los Angeles at age 78. Peters is best known for his portrayal of a wrongly accused man in To Kill A Mockingbird, starring Gregory Peck.

Allison Keyes offers a remembrance of actor Brock Peters, who died Tuesday in Los Angeles at age 78. Peters is best known for his portrayal of a wrongly accused man in To Kill A Mockingbird, starring Gregory Peck. 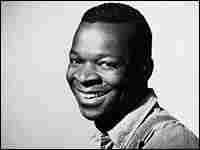 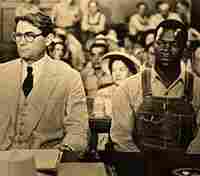 Brock Peters, right, and Gregory Peck in a scene from To Kill a Mockingbird. Reuters/CORBIS hide caption

Actor Brock Peters, known by many for his poignant performance in the movie, "To Kill a Mockingbird," died yesterday at the age of 78. NPR's Allison Keyes has this tribute.

(Soundbite from "To Kill a Mockingbird")

Mr. BROCK PETERS (Actor): (As Tom Robinson) I got down off the chair and I turned around. She sort of jumped on me. She hugged me around the waist. She reached up and kissed me on the face. She said she'd never kissed a grown man before and she might as well kiss me.

KEYES: Peters' character was defended by Gregory Peck, who played Atticus Finch. But the career of this prolific entertainer began long before this film. Born George Fisher on July 2nd, 1927, of African and West Indian parents, Peters had decided by age 10 that he wanted to be in show business. He was raised in Harlem where he sang soprano in the St. Philip's Church choir. By the time he was 14, he was studying drama and classical singing as a baritone by then at the Music and Arts High School in New York City.

Mr. PETERS: (Singing) Ol' man river, that ol' man river, he must know something but he don't say nothing. He just keeps rolling, he keeps on rolling along.

KEYES: In this rendition of "Ol' Man River" from the Jerome Kern compilation album, "Life Upon the Wicked Stage," Peters' voice had a rich, warm timbre and a rippling vibrato. He did years of stage performances in the 1940s and '50s, but he also worked odd jobs to help support himself. In 1949, Peters landed a stage role in "Porgy and Bess," and he went on tour with the company. In 1954, Peters made his film debut alongside Dorothy Dandridge and Harry Belafonte in "Carmen Jones."

Mr. PETERS: Bail her out of that suit. Who's responsible for this?

Mr. PETERS: Interfering with a wire tap, destroying government property. You heard me. Remove the prisoner off that table.

KEYES: Five years later, he played Crown in the movie version of "Porgy and Bess." Peters has often chosen roles in which he exudes authority and power. He told NPR in a 1976 interview that his choices were, in some ways, political.

Mr. PETERS: Throughout my career, I have said no. I've been very selective about the kinds of things that I would play. Part of that selectivity is exercised for me by the fact that I'm not asked to do some things. For example, all through this period of exploitation, or blacksploitation films, I was never approached except in one instance to be part of the cast of any such film, nor was I submitted by the people who represent me because they, too, would not have me--the career that has been built over the years doesn't go in that direction at all. And I've stayed clear of that sort of thing. And I've been described as a serious actor and the roles I've played have run from Shakespeare to Ibsen to anything that really is theater.

KEYES: He was deliciously menacing as Darth Vader in a 1981 NPR-produced radio adaptation of "Star Wars."

Mr. PETERS: (As Darth Vader) Once again, you appear where rebel activity is rampant. You should be more prudent.

KEYES: Peters was also beloved by fans of "Star Trek." He played the father of African-American Captain Benjamin Sisko in the TV series "Star Trek: Deep Space Nine." As Admiral Cartwright in the movie "Star Trek VI: The Undiscovered Country," he played a racist who plotted against any alliance between the Federation and the Klingons.

Mr. PETERS: (As Admiral Cartwright) The opportunity here is to bring them to their knees, then we'll be in a far better position to dictate terms.

KEYES: Peters received many honors during his career. He was inducted into the Black Filmmakers Hall of Fame, received a lifetime achievement award from the Screen Actors Guild and was nominated for a Tony for his role in the Broadway musical "Lost in the Stars."

(Soundbite from "Lost in the Stars")

GORDON: Thanks for joining us. That's our program for today. To listen to the show, visit npr.org. If you'd like to comment, log onto npr.org and click on `contact us' or give us a call at (202) 408-3330. NEWS AND NOTES was created by NPR News and African-American Public Radio Consortium.

GORDON: I'm Ed Gordon. This is NEWS AND NOTES.