Accessibility links
A New Generation of Punk at Dischord Records In the late 1970s, teens in the nation's capital were building their own punk scene — and many of those bands recorded for an independent record label called Dischord. That pioneering label is still alive today, and just as vital to a new music scene.

Listen
A New Generation of Punk at Dischord Records

From '20 Years of Dischord'

Just some of the songs and bands promoted by the record label through the years:

Autoclave: 'I'll Take You Down'

Q And Not U: 'Hooray for Humans' 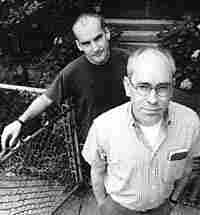 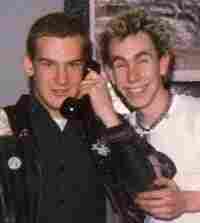 Back in the day -- MacKaye, left, and Nelson as teens in 1980. Dischord Records hide caption

In the short list of world capitals of punk rock music, there's London, New York City and Los Angeles -- but that list wouldn't be complete without Washington, D.C.

In the late 1970s, teens in the nation's capital were building their own punk scene, complete with spiked leather and dyed hair, that was as bold and electric as the music they made.

Many of those earliest D.C. bands recorded for an independent record label called Dischord, founded 25 years ago by Ian MacKaye and Jeff Nelson. That pioneering label is still alive today, and a new generation of bands are finding a home for their socially conscious, harder-edged style of rock 'n' roll.

Dischord put out its first record in 1980, a 45 rpm recording by the MacKaye/Nelson group Teen Idles called "Minor Disturbance." The band cut, folded and glued each of the thousands of record jackets by hand. That sense of communal mission, says MacKaye, is what drove the label.

"We had a slogan: 'Putting D.C. on the map.' Our initial mission was to document the punk scene," he says. Another long-standing tradition at Dischord has been political activism. Groups like Mackaye's own disbanded Fugazi have routinely written songs and joined protests against homelessness, apartheid and U.S.-led conflicts around the world.

Today, the label may be a modern business, but it's still driven by the straightforward communalism that first defined it. "We don't use contracts, lawyers, any of those kinds of things," MacKaye says. "We are partners -- they make the music, and we make the records."

Dischord.com, the Record Label's Official Web Site
Photos of Dischord Bands Through the Years at Southern.net