Accessibility links
Past and Future Love: Wong Kar-Wai's '2046' Hong Kong's Wong Kar-Wai is a visual stylist: witness In the Mood for Love and Days of Being Wild. His latest film, 2046, runs riot with color, texture -- and beautiful people.

Hong Kong filmmaker Wong Kar-Wai rushed his film 2046 to the Cannes Film Festival in 2004, but it was unfinished and failed to impress audiences. A year has passed, and NPR's Bob Mondello says that Wong Kar-Wai used the time wisely.

Wong has developed a reputation as a visual stylist in his art house hits In the Mood for Love and Days of Being Wild. Now using Technicolor for the first time, the director runs riot with color and texture in 2046. And with a cast that includes Gong Li, Zhang Ziyi, Tony Leung and Faye Wong he has also cast some of the most beautiful people alive today.

The result is a sumptuous time-teasing story, as long-time Wong collaborator Leung plays a writer who is fixated on a once-in-a-lifetime love affair -- even as he flirts and has affairs with a string of women. 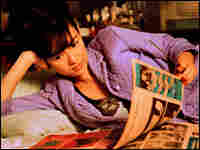 Actress Zhang Ziyi plays a call girl whose life soon intersects with that of the writer next door. Sony Classics hide caption