Warning: getimagesize(https://media.npr.org/kitchen/hot fudge200-0714f10a777a59be156c998bf68664ef1d3aa850.jpg): failed to open stream: HTTP request failed! HTTP/1.0 400 Bad Request in /var/www/html/src/Views/CommonJsonldView.php on line 87
 Hide the Hot Fudge : NPR
Accessibility links
Hide the Hot Fudge Food writer Betsy Block packs her kids lunches on brown bread, with celery sticks and edamame on the side. The hot fudge and brownies, she keeps to herself. Get her recipes for your secret stash. 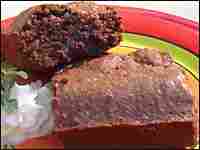 To share or not to share? Try these fudgy brownies and decide for yourself. Recipes for Easy Brownies and Hot Fudge follow. Andrew Pockrose hide caption

Now that everyone's headed back to school, I should be wistful about the summer past or the kids growing up. But instead I'm reeling at the thought of nine long months of packing lunches. Mornings combing through the fridge for healthy options, afternoons of bitter comments about what other -- read luckier -- kids get.

Betsy Block is a Boston-based freelance writer. Her work has appeared in Gourmet, The Boston Globe and other publications. She is also the voice of the blog Mama Cooks.

Problem is: I'm a Good Mother, and I'm teaching Good Eating Habits. Sure, once in a while, on special occasions, I'll throw a cookie or two in the bag. But mostly, we shun junk food. I lead by example.

So recently, when my husband and I took the kids to an ice cream shop, I ordered one puritanical kiddie scoop of ice cream and only ate half, to teach them about self-restraint. Then I went back to the counter "to get napkins."

That's when I ordered the cup of hot fudge to go, "in a bag, if you have one," and slipped it in my purse. At home, I tucked the contraband behind the milk; two weeks later, I was still scooping out spoonfuls every few nights after story time. My kids never knew it was in the house.

But at least I know I'm not alone when I lie to my kids in the name of good parenting. A friend once told her exceedingly picky eater that "the stores ran out of hot dogs, so there won't be any for a while." Another has a "secret" stash of candy. (Or so she thinks: Her kids told me about it.) And a third actually had his then-toddlers convinced that Dunkin' Donuts was a bagel store. He'd pull up to the drive-through and loudly ask for one blueberry and one plain bagel. Then, in a whisper, he'd add, "And a cruller." He'd crouch down while his two sons sat in the back, innocent and unknowing. "It's just lying," he'd told me morosely, shaking his head. "I don't feel good about it."

He still did it, though, and so do I. But I'll bet that none of us otherwise-upstanding parents feel good about lying to our kids, and yet, we persist. Why? Is it strictly for our children's health? If so, I should be better about sharing my multigrain waffles and pineapple chunks. Or is the truth secretly (and more darkly) that we just don't like to share?

I plead the Fifth.

Judging by how often they come looking for me when I'm eating, though, my kids must be able to smell fear. It becomes a game of cat-and-mouse: The panic of knowing they're on the prowl makes me hide in the kitchen, eat when they're out of the house (say, at school, with their healthy lunches), even –- ahem -– lie.

Lately, though, I've begun to worry that my son is onto me. He's nine, he can read, and six years of school have turned him into a pretty savvy guy. The falsehoods need to stop. But by now I'm used to sneaking around –- I've even come to believe it makes food taste better –- so one day when he was in the other room safely hypnotized by the TV (or so I thought), I moved quickly, practically inhaling a brownie. It was good.

Seconds after I'd finished he appeared, genie-like.

He was looking straight at me. Something within shifted uncomfortably -- was it my conscience, or something else? Then I realized: prudence. A few years from now when I ask where he's going, I don't want to have set a precedent for deception.

The moment, like the chocolate, was bittersweet. The decision? Strategic.

4 ounces unsweetened chocolate (half a box, if you're using Bakers or Hershey's squares)

3 large eggs, room temperature (I never remember to take the eggs out beforehand, so I pop them, still in their shells and very carefully, into the microwave for 20 seconds)

Melt butter and chocolate together. Let cool slightly. Add to sugar, combine well. Add vanilla, stir, then add eggs one at a time, beating well after each addition, until glossy. Stir in flour until mixture is smooth. Pour in prepared pan, making sure the batter gets into the corners. Bake at 400 degrees for 25-30 minutes.

The top will have puffed up, but as soon as you take it out of the oven it will sink back down and look crackly. The center will be slightly undercooked. This is the key to great, super-fudgy brownies. Use a small spatula to get the brownies out, scooping from the bottom slowly and carefully. They won't be perfect looking -- they'll be crumbly and hard to work with -- but they're definitely worth it. Share (or hide) as your conscience dictates.

Note: If, like me, you have a four-year-old "helping," don't worry if a little melted chocolate and butter slosh out of the pan, or if some of the flour doesn't make it into the bowl. This is a hardy recipe and can withstand real-life circumstances.

You might not even have to hide this one; many kids don't like bittersweet chocolate anyway... (My kids, nine and four, do though. Figures.)

1/2 ound (8 ounces, or half a bag if you're using chips) semi-sweet chocolate

Heat the cream until small bubbles form on the top, add the chopped chocolate and corn syrup. Cook on medium heat, stirring constantly, for five minutes. Pour over ice cream and devour.

Save leftovers in the fridge.

(Most recipes say to leave the hot fudge alone while it's cooking. I tried this and then couldn't resist the siren call of the computer, losing a batch of sauce and very nearly a pan in the process. Stirring constantly suits me -- I like fussing with chocolate -- and if it adversely affected the end result, none of us could tell.)