Accessibility links
Ice-T Looks Back at 'New Jack City' Rapper and actor Ice-T, one of the pioneers of the "gangsta rap" genre, now has a regular role as an undercover cop on the NBC crime drama Law and Order. Born Tracy Marrow, the rapper got his big acting break in the film New Jack City. He talks about his acting career and the film's 15th-anniversary release. Note: Segment contains language some may find offensive.

Rapper and actor Ice-T, one of the pioneers of the "gangsta rap" genre, now has a regular role as an undercover cop on the NBC crime drama Law and Order. Born Tracy Marrow, the rapper got his big acting break in the film New Jack City. He talks about his acting career and the film's 15th-anniversary release. Note: Segment contains language some may find offensive. 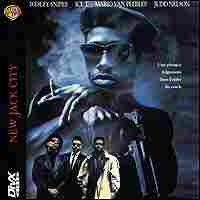 The cover of the DVD features Wesley Snipes. Ice-T is at bottom left, with Judd Nelson and Mario van Peebles. hide caption

Hard to believe, but it's been 15 years since "New Jack City" hit the movie theaters. Mario Van Peebles' hip-hop melodrama turned Wesley Snipes and rapper-turned-actor Ice-T into movie stars. These days, Ice-T is a regular on NBC's "Law & Order: Special Victims Unit," but he's also helping mark the anniversary of the film that placed him on Hollywood's radar. He spoke with NPR's Farai Chideya about how he landed a major role in "New Jack City."

How did you first get involved, and how much acting had you done up until then?

ICE-T (Rapper/Actor): Well, the only thing I'd ever been in as far as film, I was in the movie, "Breakin'." You know, I don't know if people can remember that, with Boogaloo Shrimp and Shabba Doo.

CHIDEYA: Oh, I remember it.

ICE-T: Yeah. So I was the rapper in that movie. I wasn't--I didn't have actual lines, but I rapped when they went into the club and that was my first experience with film. As far as "New Jack City" went, I was just minding my business in a club and Mario Van Peebles happened to be there and he said, you know, `I want you to be in this movie.' I thought he was just making Hollywood conversation. You know, people in Hollywood walk up to you and say `I--we may--could work together.' I'm like, `Yeah, whatever, Mario.' But he was serious. So the next day I called him at Warner Bros. and they had a part for me. Now me not being an actor, I thought it was going to be a small part. And when I read the script I was like, `Well, this is like all of the lines.' You know what I'm saying? `What are you talking about?' But they said I could do it.

CHIDEYA: Did you think you could do it?

ICE-T: No. I mean, I had made my name as, you know, kind of being an outlaw rapper, gangster rapper and all that. The role was to play a police officer. I was kind of nervous because no rappers had really made it in film at the point. But I'm the type of person that can't turn down opportunities, you know. I come from a background with no opportunities, so when people start giving you a chance to be in a movie you've got to go.

ICE-T: There were none.

CHIDEYA: ...hit the theater. Tell us a little bit more about who you played, this cop that you played, and how you related to the role.

ICE-T: Well, the role--I played a character called Scotty Appleton and he was supposed to have been a `new jack' cop, a cop that kind of went against the grain.

Mr. MARIO VAN PEEBLES: (As Stone) I've been authorized to set up an independent drug-fighting unit and I'm picking you. Got it?

ICE-T: (As Scotty Appleton) Why me?

Mr. VAN PEEBLES: (As Stone) What do you mean, why you, man? You're from the neighborhood. I can trust you.

ICE-T: (As Scotty Appleton) So what's the catch?

Mr. VAN PEEBLES: (As Stone) Freddy here goes with you.

Mr. VAN PEEBLES: (As Stone) Hey, hey, hey, hey, listen up, Scotty. This is not going to be another one of your wild-ass solo acts, man. Now Freddy is the only cop I could find crazy enough to even team up with you.

ICE-T: I really didn't think I was the right person to play the cop. I thought I should have played Wesley's part, you know. I wanted to be Nino Brown. But they were like, `Ice, it's not so much about you playing a cop. The problem is in this movie you have to go undercover and to get next to Nino you have to be convincing as a gangster.' So that's th--why they picked me. They either had to be pick somebody who knew how to be a player or get somebody who was better at a cop and trying to act like a player. They said `Well, the player is the hardest person to really--to act like.'

CHIDEYA: Now let me move into talking about rappers-turned-actors. We had Andre Benjamin on the other day, and he said that rap is a young man's game and that one reason he was moving into acting was because he wanted to keep having a career. Did you foresee this whole sort of movement of hip-hop stars and rap stars into acting that's happening today?

ICE-T: Absolutely not. I mean, I'd have nev--I never thought that they would give us a chance to act. I mean, for somebody to give you a chance to be in a movie you just have to do the best you can. But I mean, I didn't get into acting because I wanted--you know, I'll rap till I'm 75 years old. I don't think rap is a young man's sport. Take a look at George Clinton. You know, take a look at Mick Jagger. I think if you really love the music and stay with it, you'll always have an audience. I act because it's just another door that opened up for me and I enjoy that also. Fortunately, I do it well enough that people enjoy my work. The audience is going to keep you employed or unemployed. They're going to say--I mean, if I'm on "Law & Order" and people don't like me, I will be off "Law & Order" at record speed.

CHIDEYA: Let's talk a little bit more about "Special Victims Unit," the "Law & Order" that you're in with Richard Belzer. What kind of chemistry do you guys have together? You're playing partners.

ICE-T: Well, Belzer is easy to work with because he's Jewish and I'm black and, if the Klan come, they after both of us. They going to grab him first, you know what I'm saying? And they call us on the show, `the men in black.' So when we interrogate you, even if you didn't do it we going to beat you up. You know what I'm saying? So I think when you're dealing with a show about rape and something so sensitive, you need a little comedy relief. You know, we crack jokes a little bit. And then, also, people want to see these perpetrators dealt with aggressively.

CHIDEYA: Now do you see any disjunction between the character that you play in "Special Victims Unit" and then doing something like your whole film about pimping?

ICE-T: Well, me--honestly, if you do a film about pimping, that's more about my real life, you know what I'm saying? So my life was made up of being, you know, out on the street, gangster, robbing banks, pimping. So if I do something along those lines, that's not really acting. That's just Ice really doing something--would be like a documentary. Now when you see me on television and I can play a convincing cop, that's means I'm acting and they got to know that, you know what I'm saying? So there's no real paradox. I mean, the thing of it is if I were to get out and lie and tell people, `Hey, I went to school every day and, you know, I was a mama's boy that went to church,' that could end my career because people would be like, `Look at this man's jail record. Who is Ice trying to fool?' But playing gangsters and playing cops, it's all the same to me. It's all heavies.

CHIDEYA: Now let me ask you a couple thinks about music ratings and video game ratings. You played a role in the video game, San Andreas, which has been, you know, part of this whole ongoing controversy over how much video games should be rated. Years ago, of course, when you were in "Body Count," you had the song, "Cop Killer" and Dan Quayle got incensed, called it obscene. It became a national controversy. From your perspective of years in the industry, what do you think about ratings?

ICE-T: I have absolutely no problem with a rating system. You know how they have the parental guidance stickers? I was the first record ever stickered. I don't want someone to buy something that may be considered aggressive or offensive and not know it's coming. I'm just not with censoring. I just feel that yo--the person that wants it like that, should be able to get it.

CHIDEYA: ...store shelves this week. Rapper and actor Ice-T, thank you so much.

ICE-T: Thank you for having me.

GORDON: That does it for the program today. To listen to the show, visit npr.org. If you'd like to comment, call us at (202) 408-3330. NEWS & NOTES was created by NPR News and the African-American Public Radio Consortium.