Accessibility links
Donald's Story: Health Care When You're Homeless Last year, Donald Cooper, a homeless diabetic, began medical treatment and support with an ambitious new program in Boston. He's suffered setbacks, but his medical team is getting him back on track. 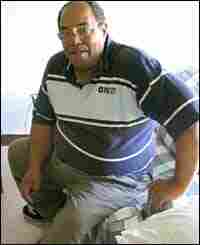 Donald Cooper, pictured in his new apartment in the Boston neighborhood of Dorchester. It's the first home of his own since 1993, when the bank foreclosed on his Victorian house, just a few blocks away. Richard Knox, NPR hide caption

Last year, NPR introduced listeners to Donald Cooper, who was living in a homeless shelter near Boston after a string of misfortunes. He'd had cancer and lost his job, and the bank had foreclosed on his house. His marriage had fallen apart. His diabetes was out of control.

At that time, Cooper began getting medical treatment under a new, federally funded health program that aimed to set a new standard for treating even the most complex diseases in homeless patients.

Listen to a 2004 story in which NPR introduced listeners to Cooper:

In the year since, Cooper has suffered some setbacks, and he temporarily lost touch with his medical support system. His medical team is now getting him back on track. And recently, Cooper got his own government-subsidized apartment, a development that his doctor says is key to his long-term physical and mental well-being.

Cooper's story illustrates what it takes to provide effective health care for people with chronic diseases and multiple misfortunes.