Listen
Son Volt Is Back: 'Okemah and the Melody of Riot'

Son Volt Is Back: 'Okemah and the Melody of Riot'

Roots-rock legends Son Volt are back with their first release in seven years. Okemah and the Melody of Riot features some of the finest songs of frontman Jay Farrar's career. 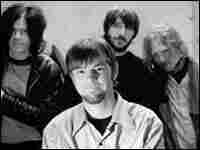 To many listeners, the album's blazing guitars are sure to bring to mind some of the greatest recorded moments of Neil Young & Crazy Horse. Lyrically, Farrar continues to reinterpret the myth of America, as he did in his former group, Uncle Tupelo.

The album is steeped in both history and current politics -- the name Okemah is a reference to the birthplace of Woody Guthrie, in Oklahoma. And Like Guthrie, Farrar doesn't shy away from commenting on events that have shaped the years since his last record.