Accessibility links
Ga. Woman Pardoned 60 Years After Her Execution A black maid executed in Georgia in 1945 is being granted a pardon by the state for killing a white man she said enslaved her. Lena Baker said she acted in self-defense, but a jury of white men convicted her after a one-day trial. Baker is the only woman to have been executed in the state's electric chair. On Aug. 30, Georgia authorities will present a proclamation to her descendants, including her grandnephew Roosevelt Curry, who led the drive to clear her name.

A black maid executed in Georgia in 1945 is being granted a pardon by the state for killing a white man she said enslaved her. Lena Baker said she acted in self-defense, but a jury of white men convicted her after a one-day trial. Baker is the only woman to have been executed in the state's electric chair. On Aug. 30, Georgia authorities will present a proclamation to her descendants, including her grandnephew Roosevelt Curry, who led the drive to clear her name. 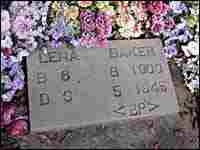 Next week, Georgia will officially grant a pardon to Lena Baker. It will be a posthumous pardon. Baker was executed 60 years ago for killing a white man. She was the only woman to die in the state's electric chair. Lena Baker's trial, conviction and execution took place in Cuthbert, in rural southwest Georgia. NPR's Kathy Lohr reports.

Lena Baker had lived through the Depression, and it had been tough. She was born into a family of black sharecroppers. It was back-breaking work. African-Americans knew their place.

Ms. LELA BOND PHILLIPS (Lena Baker Biographer): She was a black woman. She was from the South. She was poor. She never had a chance in her life.

LOHR: Lela Bond Phillips has written a book about Lena Baker. By the 1940s, Baker had picked cotton, cleaned houses and washed clothes to get by. But these jobs didn't bring in much money. She had three children to feed. Phillips said Baker's life was about to change when she got a position as a nurse to Ernest Knight, a white man who had broken his hip.

Ms. PHILLIPS: I think probably that was the best job she ever had, and it was probably a fairly decent job for her for that time. He was called what one old sheriff around here called, told me, a pistol toter. And I think it developed into a sexual relationship.

LOHR: At the time, intimate relationships between whites and blacks were not tolerated. Baker had worked for Knight for about two years, but the job had become her nightmare. Knight's son beat her. What happened on April 30th, 1944, the day Knight was killed, is unclear.

A block and a half from the town square in Cuthbert is Ernest Knight's mill. It's still standing, but barely. Scraps of wood, broken beer bottles and weeds litter the lot. A blue door still designates the spot where the office would have been. On that Sunday, 60 years ago, when most residents spent the day in church, the trial transcript shows Knight and Baker had been drinking and arguing. In fact, he had appeared at her home the day before. He had threatened her several times and forced her inside his mill, holding her prisoner all day long.

LOHR: John Cole Vodicka is the director of the Prison & Jail Project, an advocacy group that lobbied on behalf of a pardon for Lena Baker.

Mr. COLE VODICKA: And this was where Ms. Baker said he had locked her in here for the better part of that day, April 30th, and then had come back and demanded that she have sex with him. And she refused. He picked up a metal pole or a metal pipe and was coming at her, and they wrestled over that. And then his gun was produced, and the gun went off, and he fell dead.

LOHR: Just four months later, the case went to trial. The trial lasted four hours. Lena Baker was found guilty. No witnesses were called in her defense. She was sentenced to die in the electric chair. After the trial was over, Cole Vodicka says Baker's attorney withdrew from the case.

Mr. COLE VODICKA: She had no defense, charged with capital murder, on trial for her life, sitting in a jail cell and then over in the state penitentiary, watching the hearse pull up to take her body back to Cuthbert.

LOHR: The execution took place the following March, less than a year after Knight's death. The undertaker buried Baker's body five miles outside of town in an unmarked grave behind Mt. Vernon Baptist Church. Most of the townspeople never talked about it back then. Martin Nimbry(ph) is deacon here where Baker used to sometimes sing in the church choir.

Mr. MARTIN NIMBRY (Deacon, Mt. Vernon Baptist Church): There was, like, a hush-hush. They wasn't saying too much, you know, 'cause they were scared at that time, too. Black folks were scared something might happen to them.

LOHR: People still don't want to dredge up the past in the black or the white communities. All of the jurors in the case are dead. Joanne Raye(ph) is a librarian and the daughter of the special prosecutor in the case. She was going into the first grade at the time of the murder.

LOHR: What do people say today about the case?

LOHR: But there are some in southwest Georgia who want to teach the younger generation about Lena Baker, among them Cuthbert Mayor Willie Martin, who says that while this may reopen some old wounds, it's a story that needs to be told.

Mayor WILLIE MARTIN (Cuthbert, Georgia): When there's an injustice done, I mean, you have to address those issues. And, you know, in the past, with the killers of Medgar Evers, they just recently brought them to trial, so things like this, you know, can help the healing process.

LOHR: The Georgia Board of Pardons and Paroles is granting Baker a pardon, saying the state committed a grievous error when it denied clemency in reviewing her case. Roosevelt Curry is Lena Baker's great-nephew. He says it took far too long for the state to recognize its critical error that cost his great-aunt her life.

Mr. ROOSEVELT CURRY (Great-Nephew of Lena Baker): It's the right thing. They can give me all the papers they want to. Everybody in this world can talk to me, but you cannot--remember that--you cannot mend a broken heart.

LOHR: Lena Baker's grave, now designated by a simple concrete marker, sits in a far corner of the desolate graveyard behind Mt. Vernon Baptist Church on a country highway outside of Cuthbert, Georgia. Family members say they'd like to clean up this graveyard and create a memorial to Lena Baker to erase the shame associated with her name for the past 60 years. Kathy Lohr, NPR News.