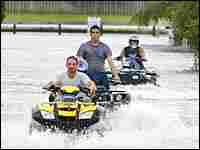 Katrina, which first struck Florida last week as a tropical storm, is now a powerful Category 5 hurricane churning in the Gulf of Mexico, pointed at New Orleans.