The Campbell Brothers with John Medeski

Songs played by the Campbell Brothers with John Medeski:

The gospel band the Campbell Brothers is known for bringing innovation to a sometimes stodgy medium. It all relies on what the three brothers call "sacred steel" guitar playing. 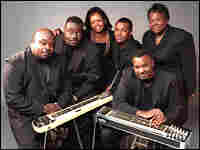 The band's leaders -- Chuck Campbell on pedal steel guitar and his brother Darick on lap steel -- are accompanied by another brother, guitarist Phil Campbell, and his son Carlton, who plays drums.

They provide a framework for the singing of Katie Jackson, whose soaring vocals seem tailor-made for spirituals. In the process, the group has reinvented a tradition of African-American church music.

Hinging on the enigmatic sound of steel guitar -- the bending, mournful notes and sweeping sounds -- the Campbell Brothers have toured extensively to spread their brand of gospel, playing in venues from the Hollywood Bowl to the Kennedy Center.

For their latest release, Can You Feel It?, the group teamed up with John Medeski, the organist extraordinaire, who produced the album. Medeski even sits in on some songs -- a gesture he repeats on World Cafe.