Accessibility links
Life at Sea Means Leaving Stability Behind Brea Evans left behind a life in a lab to work as an observer aboard the Alaska Warrior, monitoring what kinds of fish are being caught. 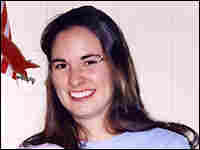 Brea, seen here at her graduation from college last year, set the bait for her new career with a bachelor's degree in marine biology from Texas A&M. Courtesy Terry Evans hide caption

Brea Evan's career reinvention finds her standing in tons of Pacific Ocean perch aboard a fishining boat. She's working as an observer aboard the Alaska Warrior.

Her job, among other things, is to monitor what kinds of fish are being caught and in what quantities. She files reports used by the National Marine Fisheries Service.

She is on a different planet from where she was three months ago, when she worked as a research assistant in a windowless lab at the University of Texas at Galveston. She was making about $28,000 dollars a year and life was stable, too stable.

She's thinking she'll sick with her new gig as an observer for at least one, maybe two years.

The money's good -- $130 per day -- even if the hours are horrendous. And then there's the downtime -- months at a stretch. Her first stop will likely be a warm beach.