Time magazine writer Christopher John Farley pens a tale about a female pirate named Anne Bonny. Farley talks about traveling from Ireland to the Caribbean to research his novel Kingston by Starlight.

I'm Ed Gordon, and this is NEWS & NOTES.

In the 18th century, few women traded home and hearth for a renegade life on the high seas, but Anne Bonny did. This brave woman from Ireland who sailed the Caribbean was notorious for picking fights and winning. Time magazine staff writer Christopher Farley retells Bonny's swashbuckling antics in his new novel, "Kingston by Starlight." Farley's combined fiction with documented fact about Bonny's trial for piracy.

Mr. CHRISTOPHER FARLEY (Time Magazine; Author, "Kingston by Starlight"): I was born in Kingston, Jamaica. I left when I was very, very young, but I went back year after year, and I used to hear these stories, stories about Anancy, the trickster spider of Jamaican legend, stories about Anancy, who was a warrior woman who fought the British in the hills of Jamaica, and finally, stories about pirates, like Blackbeard, like Calico Jack and Anne Bonny.

And I was really fascinated by the story of Anne Bonny. I always wanted to know more about it. And when I looked into it, it turned out it was actually true. It wasn't just a legend. It wasn't just a story, something that actually had basis and fact, and so to write the book, I had to travel the world. I went back to Ireland to sort of find out more about her roots. I traveled around the Caribbean to places that Anne Bonny herself went to. I located the actual transcripts of her trial in 1721 in London, and I drew from all those sources to write this book, because I just found it so fascinating that the story that I'd heard about as a kid actually had real roots.

GORDON: When you think about the time and a woman this brazen, she is a remarkable character.

Mr. FARLEY: There was a chronicler of pirate life named Captain Johnson, who wrote a book in the 18th century about pirate life. He told oldster stories about Blackbeard, about other pirates, but when it came to Anne Bonny, he had a disclaimer saying--you know, telling the reader that you may not believe this because it seems like too much of a novel or a romance. So even a few years after this happened, people couldn't quite believe their eyes, because Anne Bonny's story is just such an interesting tale.

She's someone who really came to the Caribbean with nothing, who broke all the bonds of society by dressing as a man and joining this pirate ship; you know, being on a pirate ship, you know, they're tough quarters, they're close quarters. There are people all around you. But somehow, she's able to conceal her identity and she's also known as one of the toughest fighters, if not the toughest fighter, on this crew of tough fighters. So even among pirates, she distinguished herself as someone with a particular kind of fierceness and again, that speaks to the character of Anne Bonny and the kind of woman that she was.

GORDON: Now give me the correct mix, if you can, Christopher--and I don't know if there's an easy way to do this--a poetic license that you took with what you could find out factually.

Mr. FARLEY: Well, what I did is I made sure the story itself followed the lines of fact; that, you know, she really was aboard this ship. She really did meet the people that she met in this book. She really was put on trial in 1721. The surprise ending of the trial was something that actually did happen. But within those boundaries, I felt free to imagine more of her family history, to imagine some of her motivation, to imagine things she might have said on board the ship, because some of those things are lost to history. But the basic boundaries of her story are set in stone, are fact. They're outlined in the transcript of her trial that I located in London. So that's all known.

GORDON: Let me ask you this. Those of us who are now of a certain age think back fondly upon our childhood, and no matter where you were born and raised, that is home for you. In spite of leaving, as you say, at an early age, how much fun was this to go back and live Jamaican folklore and dream of all of the things that I'm sure, as you say through your visits as a child, must have come rushing back to you, I would guess.

Mr. FARLEY: Well, I'll tell you, I'm a dad with two kids, and it's a whole lot better to tell your wife, `We've got to go on a research mission to Jamaica' than it is to tell her, `We're going behind the Iron Curtain to do a book that I'm working on there.' So it was great to bring the family along on this. They really enjoyed it. And it was great to sort of investigate all these old haunts, because I felt like I was taking an adventure myself. I mean, Anne Bonny's story in "Kingston by Starlight" is such an adventure, it's such an unbelievable tale, it was a lot of fun to sort of retrace her steps, to go to the places where some of her crew mates may have been hung, to go to places where maybe she threw back a drink herself back in the day, to go to places where she was standing on the docks waiting for her ship to come in. All of that really was fascinating. It was just a wonderful trip that I took myself. I tried to communicate in the book itself the kind of passion, the fun, the adventure I took in writing this story, trying to make sure that was in the book itself, too, so readers could sort of come with me on this adventure, too, and feel as if they're taking a trip to the Caribbean and they're sailing along in the vessel along with Anne Bonny.

GORDON: The novel is called "Kingston by Starlight." The author, Christopher John Farley. Thanks for spending time with us today.

Mr. FARLEY: I appreciate you having me. Thanks a lot. 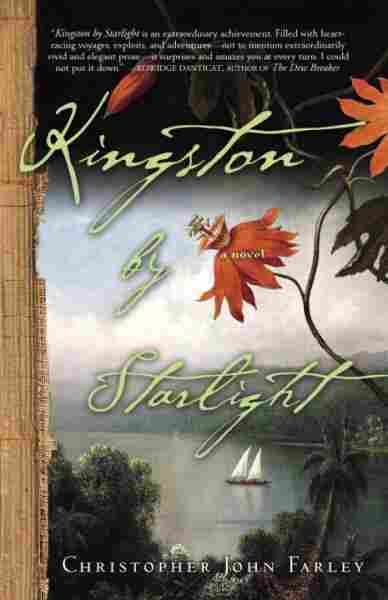