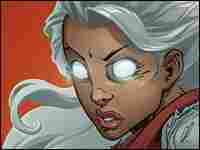 Storm, one of the key characters in the X-Men franchise. Marvel Comics hide caption

Superheroes are box office platinum these days. The latest comic book adaptation movie, "The Fantastic Four," grossed $56 million in the US on its opening weekend alone. But are African-American heroes on the pages of comic books and on the big screen getting the same kind of adulation? NPR's Allison Keyes has more.

Group: (Singing) Spider-Man, Spider-Man does whatever a spider can.

For the 1967 cartoon through pages of comic books to the 2002 and 2004 "Spider-Man" movies, it seems people can't get enough of the web-head; not even Spidey's arch enemy, The Green Goblin.

THE GREEN GOBLIN: Are you in or are you out?

SPIDER-MAN: It's you who's out, Gobbie, out of your mind.

KEYES: Together, the movie "Spider-Man" and "Spider-Man 2" have grossed $1.6 billion worldwide, but black superheroes haven't done as well. Omar Bilal, curator of the BlackSuperhero.com Web site, says the people who frequent his forums are angry about that.

KEYES: So does Blade, the African-American vampire hunter who happens to be half-vampire. In the movie "Blade II," he's menaced by a roomful of villains.

KEYES: But "Blade's" snappy dialogue and spectacular martial arts skills carried the movie to a worldwide gross of 286 million. That's a respectable figure, but way below "Spider-Man's" league. Part of the problem, says the Web site's Bilal, is that mainstream superheroes receive far more publicity and are better known than African-American comic book characters.

Mr. BILAL: I think a lot of times, it's being able to get your story out there, and unfortunately, there are certain characters and creators that have more--I don't know--clout. A lot of the black characters are created independently, and that, in itself, is going to limit you in some ways.

KEYES: Spawn, an African-American superhero who happens to be a demon from hell--yeah, that hell--is an independent character created by Todd McFarlane in 1992.

KEYES: Unlike most comics that aren't backed by mainstream companies like Marvel, the first issue sold 2.1 million copies. A 1997 movie in which Spawn defeats one of the devil's minions has grossed close to $90 million.

Unidentified Character #2: Give my regards to your boss. Tell him he's next.

Unidentified Character #3: Not bad for a dead man.

KEYES: But other independent comic companies featuring black characters haven't done as well. Milestone Media launched with several titles in 1993. Co-founder Derek Dingle, who's also vice president and executive director of Black Enterprise magazine, says there was a void in the market.

Mr. DEREK DINGLE (Milestone Media; Black Enterprise Magazine): At the time, there were very few, if any, African-American superheroes. There were none that had their own titles. And we thought it was very important to have those images in comic books.

Unidentified Character #4: You can't keep this up all night.

Unidentified Character #5: I don't have to. We're almost out of support beams.

KEYES: Though Milestone's wise-cracking teen superhero Static Shock continues to dazzle cartoon fans with his electromagnetic powers, the company stopped publishing its comic books after five years. Dingle says a combination of a sudden increase in the price of books and issues with retailers caused the company's failure.

KEYES: In the last few years, more mainstream African-American superheroes have been getting recognition.

KEYES: Academy Award winner Halle Berry has played the X-Man Storm in two "X-Men" movies so far. Storm is an African princess with mutant power over the weather and the first major black female superhero.

Ms. HALLE BERRY: (As Storm) Do you know what happens to a toad when it's struck by lightning? The same thing that happens to everything else.

KEYES: In the comic books, Storm sometimes leaves the X-Men, but Berry has complained that in the movie, her character has been marginalized. This year, Marvel Comics reintroduced one of the first major black superheroes, Black Panther. He first appeared in 1966 and rules the fictional technologically advanced African nation, Wakanda. Filmmaker Reggie Hudlin writes the comic. He explains why it was ripe for a remake.

Mr. REGGIE HUDLIN (Filmmaker): People like rich, powerful heroes now, so when you have a guy who is the king of his own country, who's so rich, they don't even pump the petroleum that's in the ground, that it's the right character for the right time.

KEYES: Marvel has insisted it wants this version of the Black Panther to succeed on the same level as Spider-Man, but it may be tough to connect with consumers who may be more accustomed to stereotypical images of black superheroes. The first such character named Whitewash appeared in the 1940s. He was drawn in full blackface.

KEYES: The next round of black superheroes, including DC Comics' Black Lightning and Marvel's Luke Cage fought most of their battles on the streets of the inner cities in the same vein as blaxploitation heroes like Shaft.

Unidentified Character #9: You want me, huh? A detective.

Unidentified Character #10: Yeah, I want you ...(unintelligible) detective and I want you because you got your other foot in Ryder's(ph) craw.

KEYES: University of California Professor Patricia Turner, author of "Ceramic Uncles & Celluloid Mammies," says blaxploitation films develop such a niche among movie audiences that it makes sense that comic book companies would try to piggy-back onto their success. But Turner notes that the image of a black hero dating back to the '50s couldn't possibly be the same as, say, Superman.

Professor PATRICIA TURNER (University of California): There wasn't going to be any particular interest in fighting for truth, justice and the American way since, at that time, Jim Crow segregation was alive and well, and the kinds of heroes that were talked about within the culture were people who identified ways of getting over on what you would call the man or the system.

KEYES: BlackSuperhero.com's Omar Bilal says there were other limits to what many expected from black characters in comic books or movies.

Mr. BILAL: It's almost like the more you do movies, the more you think that the black character's going to be the comic relief.

KEYES: Robert Townsend spoofed superhero flicks in his 1993 movie "Meteor Man." Its hero took guff from everyone, even his mom.

Unidentified Character #11: Because no one must ever know the true identity of Meteor Man.

Unidentified Character #12: Mom, would you stop talking like that?

KEYES: Entertainer Eartha Kitt blew fans of the TV show "Batman" away with her powerful sexy version of the supervillain Catwoman.

BATMAN: Now are you coming quietly, Catwoman, or must we use force?

Ms. EARTHA KITT: (As Catwoman) Your silver-tongued oratorio has convinced me, Batman, I hereby remit myself to your muscular custody.

KEYES: Kitt agrees with Bilal that the images of black superheroes are changing, but it will take some time.

Ms. KITT: It's coming about, though. You have to be patient. Things like that doesn't happen overnight because people have--are still conditioned to whatever they were conditioned to from the past.

Prof. TURNER: The full range of experiences, that's the best possible message, so if comic books can move us in that direction, more power to them.

Group: (Singing) And they say that a hero could save us...

KEYES: There is at least one film featuring a black superhero on the horizon. Director John Singleton is in preproduction for the movie "Luke Cage," scheduled for release next year. Allison Keyes, NPR News.

GORDON: Thanks for joining us. That's our program for today. NEWS & NOTES was created by NPR News and the African-American Public Radio Consortium.

Museum of Black Superheroes at BlackSuperhero.com