Accessibility links
Seeking Katrina News, Citizens Turn to Web Hurricane Katrina left radio, TV stations and newspaper operations in New Orleans under water. The Times-Picayune had no print edition for three days, but media outlets -- and evacuees -- are turning to the web. 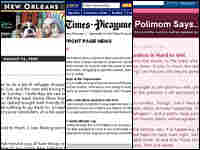 Among the sites that evacuees have turned to for news are Metroblog, left; The Times-Picayune, center; and Polimom Says. NPR hide caption

Hurricane Katrina left most radio, TV stations and newspaper operations in New Orleans under water. The Times-Picayune had no print edition for three days, but the newspaper and most other media outlets have continued to operate on the Web.

In addition to media Web sites postings on blogs and community sites abound. Craigslist, a city-by-city classified and chat site, saw a 300 percent increase in use of its New Orleans section on Wednesday, says CEO Jim Buckmaster.

This is not the first major disaster where the Internet has played a role. For example, after the recent bombings in London people posted photos and eyewitness accounts online. But unfortunately for many who are the most desperate for information, people in areas hardest hit by Katrina are left without access to the Internet.

Jan Schaffer, who runs the Institute for Interactive Journalism at the University of Maryland, predicts that as wireless connections and satellites improve, even those in the worst situations may be able to communicate. But for now, there is still a deafening silence at the heart of the storm.