Accessibility links
Celebrating Oscar Peterson's 80th Birthday Hear a concert by Oscar Peterson and others from the NPR Jazz archives, originally broadcast in 1982 and posted on the Web site in 2005 as a celebration of Peterson's 80th birthday. The concert features solo performances, as well as Peterson's trio and an appearance by Herbie Hancock. 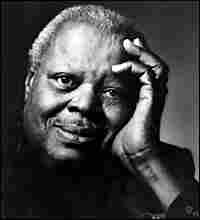 Peterson has received dozens of awards -- including seven Grammys -- and several organizations have recognized him with lifetime achievement awards.

He made his U.S. debut in 1949 -- at Carnegie Hall. He has performed with all the greats of jazz history, including vocalists Ella Fitzgerald and Billie Holiday.

We go back to the NPR Jazz archives to bring you a memorable set from 1982, featuring Peterson's classic trio (including the late bassist Neils-Henning Orsted Pederson) and other jazz greats paying tribute to the great Canadian pianist.