Accessibility links
Roberts Ready for Senate Hearings Kenneth Jost, Supreme Court editor for CQ Press, writes that federal appeals court Judge John Roberts will face increased scrutiny in his nomination for Chief Justice of the United States, but that his credentials and GOP solidarity seem likely to assure his confirmation. 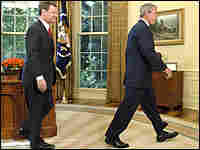 Then, Rehnquist's death on Sept. 3 after a nearly year-long battle with thyroid cancer created a second opening on the high court.

Facing criticism for his handling of hurricane Katrina and the situation in Iraq, Mr. Bush decided to elevate Roberts. In doing so, he passed over two conservative but controversial Supreme Court justices he has praised in the past: Antonin Scalia and Clarence Thomas.

Mr. Bush stressed the need to have a chief justice in place when the high court reconvenes on Oct. 3.

"The Senate is well along in the process of considering Judge Roberts' qualifications," Bush said. "They know his record and his fidelity to the law. I'm confident that the Senate can complete hearings and confirm him as chief justice within a month."

Bush's move could mean that the court would have nine justices in place when the new term opens. In announcing her retirement on July 1, O'Connor had said she would defer stepping down until after the confirmation of her successor. She has been participating in the court's business during its summer recess.

With the increased importance of the nomination, Roberts will face tougher scrutiny when he goes before the Senate Judiciary Committee. The chief justice presides over the justices' private conferences to select cases for review and discuss opinions after arguments. He also assigns opinions when he is in the majority.

But Roberts' impressive legal credentials, coupled with Republican unity in the GOP-controlled Senate, suggest he will remain in good stead with the committee.

In addition, by succeeding Rehnquist rather than O'Connor, Roberts would replace one conservative vote with another. O'Connor was a pivotal swing vote during her 24 years on the court, raising the stakes for both parties on Mr. Bush's next nomination. President Bush gave no immediate indication of when he would choose a nominee for that vacancy.

At age 50, Roberts would become the youngest chief justice in more than 200 years and could help steer the court in a conservative direction for two decades or longer.

Democrats had been laying the groundwork for close questioning of Roberts on conservative positions he took as a lawyer in the Reagan and first Bush administrations on such issues as abortion, women's rights, civil rights, and school prayer.

Nearly two months after his initial nomination, however, no Democrats had formally vowed to vote against Roberts in committee or on the Senate floor. And no Republicans had signaled any likelihood of breaking ranks to vote against Bush's choice for the first vacancy on the high court in 11 years.

The leading liberal interest group working against Roberts' nomination responded to Bush's announcement by promising again to "vigorously" oppose Roberts' confirmation because of his views on civil rights and other issues.

When the hearings begin Monday, they will start with opening statements of up to 10 minutes from each of the panel's 18 members: 10 Republicans and eight Democrats. Roberts will then make a brief opening statement -- his first detailed public remarks since Bush nominated him for the court on July 19.

Following Roberts' statement, questioning will begin, likely the following day. The committee's Republican chairman, Arlen Specter of Pennsylvania, will open the questioning, followed by ranking Democrat, Vermont's Patrick Leahy. Senators will have 30 minutes each for questions in the first round and 20 minutes for a second round.

Unless there are additional rounds, the committee will then meet in private to consider Roberts' FBI background check. The panel will then take testimony in open session from 30 public witnesses -- 15 chosen by Republicans and 15 by Democrats.

Democrats to Question the Roberts Record

Roberts had a stellar legal career as a Harvard law student, clerk to then-Associate Justice Rehnquist, government lawyer and private attorney before taking a seat two years ago on the federal appeals court in Washington.

Democrats were expected to closely question Roberts, however, about his record while serving in the Reagan administration as a special assistant to Attorney General William French Smith and then as associate White House counsel.

In various memos, Roberts described the Roe v. Wade abortion rights decision as "unprincipled" and questioned the legal basis for a right to privacy. He criticized racial preferences in college admissions, opposed strengthening the federal Voting Rights Act and supported legislation to prohibit federal court-ordered school busing. He also opposed the controversial "comparable worth" theory aimed at reducing the pay gap for women. And in one memo he described a Supreme Court decision invalidating a state law mandating a moment of silence in public school classrooms as "indefensible."

Democrats were also planning to question Roberts about his work while serving as chief deputy to Solicitor General Kenneth Starr under the first President Bush. Among the many cases he handled during those four years, Roberts signed one Supreme Court brief restating the administration's position in favor of overturning Roe v. Wade.

Former President Bush nominated Roberts in 1992 for a seat on the federal appeals court in Washington, but the Democratic-controlled Senate did not act on the nomination. Roberts then joined a big Washington law firm, where he continued handling Supreme Court cases for business or state government clients. All told, Roberts has argued 39 cases before the high court; his side won 25 times.

The current President Bush included Roberts in his first batch of federal appeals court nominations in May 2001, but his confirmation was delayed by partisan divisions between the White House and Senate Democrats until May 2003. In his confirmation hearing at that time, Roberts said he recognized Roe v. Wade as "binding precedent."

Supporters say Roberts' record as a judge shows he is judicious and non-ideological. Opponents see some signs of judicial activism -- notably, in one decision questioning the constitutionality of the federal Endangered Species Act.