Accessibility links
Water Level Decreases in New Orleans Mayor Ray Nagin says 60 percent of New Orleans remains under water, down from 80 percent. However, he cautions that the city remains unsafe, and the toxicity of the floodwaters has caused concern.

Mayor Ray Nagin says 60 percent of New Orleans remains under water, down from 80 percent. However, he cautions that the city remains unsafe, and the toxicity of the floodwaters has caused concern. 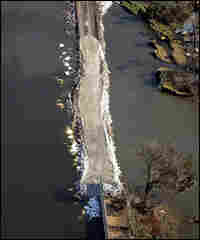 Sandbags dropped by helicopter fill the 17th Street Canal levee, the one that ended up flooding much of the city's downtown. Reuters hide caption

In New Orleans today, one week after Katrina, search-and-rescue teams continued to find survivors. Those being evacuated from the ravaged Gulf Coast region were spreading out farther across the country, to shelters and temporary homes, and officials continued trying to count and collect the dead.

BLOCK: In Washington, President Bush will seek an additional $40 billion in hurricane relief. Officials in New Orleans today did point to considerable progress on one front: pumping water out of that bowl-shaped city. Even as that continues, state and federal officials are starting to measure another problem: the environmental impact of Katrina. We begin our coverage of the day's developments in Baton Rouge with NPR's Phillip Davis.

New Orleans Mayor Ray Nagin, who had been bitterly critical of the slow pace of the rescue effort, now says that maybe the corner has been turned. After taking an aerial tour, he told reporters...

DAVIS: Throughout the inundated parts of the city, state Fish and Wildlife officers, National Guardsmen and volunteers took boats and military trucks to find stranded residents. Their numbers are dwindling, but still people are being found. The mayor said these individuals are in pretty bad shape.

Mayor NAGIN: Most of them are delirious, they're dehydrated. Lots of them are senior citizens that have not had their medications in a long time and they are requiring immediate medical assistance.

DAVIS: Nagin reiterated that conditions were unsafe and unsanitary in the city, and urged everyone to leave. But he denied that he had ordered rescuers to withhold food and water from those who refused to leave.

DAVIS: The state also announced that storm evacuees staying in hotels will not have to pay state hotel taxes.

DAVIS: McDaniel said in the flooded parts of the city, there's almost a continuous sheen on the water from leaking gasoline tanks, from cars and service stations. That'll have a serious impact on the wildlife and waters of Lake Pontchartrain, but McDaniel says that Mother Nature is resilient and the lake will recover. Phillip Davis, NPR News, Baton Rouge, Louisiana.