Accessibility links
Americans Pay Respects to Rehnquist The body of Chief Justice William Rehnquist is lying in repose at the Supreme Court, where the public has been allowed to visit. The Senate Judiciary Committee will begin confirmation hearings for Rehnquist's proposed successor, John Roberts, next Monday.

The body of Chief Justice William Rehnquist is lying in repose at the Supreme Court, where the public has been allowed to visit. The Senate Judiciary Committee will begin confirmation hearings for Rehnquist's proposed successor, John Roberts, next Monday. 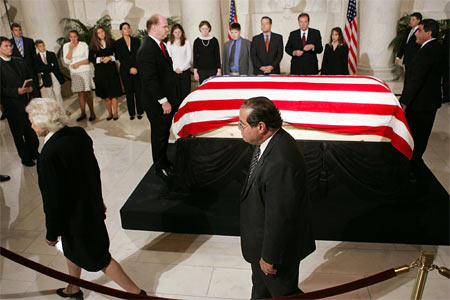 The casket bearing the body of Chief Justice William Rehnquist lies in the Great Hall of the U.S. Supreme Court as Associate Justices Antonin Scalia and Sandra Day O'Connor walk past, Sept. 6, 2005.

The body of Chief Justice William Rehnquist lies in the Great Hall of the US Supreme Court this evening; his casket watched over by a Supreme Court honor guard and two former law clerks. People lined up today outside the court waiting to pay their respects. NPR legal affairs correspondent Nina Totenberg was there as the casket was carried up the steps this morning.

There was no music, just the sound of feet on pavement as the nation's 16th chief justice was carried up the marble steps of the court in a flag-draped simple pine casket. The pallbearers: former Rehnquist law clerks, including John Roberts, Rehnquist's chosen successor. Accompanying the casket were six of the justices, some red-eyed. Justice Sandra Day O'Connor wept openly. The two Arizonans had started their legal careers together at Stanford, even dating briefly. In June, she decided to retire after the ailing chief told her he thought he could make it for another term. And now her old friend was gone.

The Rehnquist court is now history. It's been more than 30 years since two justices departed from the high court in such close proximity. In 1971, Hugo Black, the liberal lion who had served for 34 years, retired, followed a week later by John Harlan, who had epitomized the restrained, conservative wing of the court. It was Harlan's seat that Rehnquist filled, bringing to the court a more aggressive form of conservatism. In the 33 years that followed, 19 of them as chief justice, Rehnquist would manage to turn the court significantly to the right with the aid of other conservative appointees to the court. Ironically, it was O'Connor, a Reagan appointee, who often acted as a brake. And with her imminent departure, the court could turn in a much more conservative direction under the leadership of John Roberts if he's confirmed as chief justice.

There's a symmetry to the Roberts' appointment since the nominee clerked for Rehnquist and the late chief justice remained a mentor. Standing in the Great Hall today, slightly apart from the other former clerks and the grieving Rehnquist family, a 50-year-old Roberts seemed to be in the grip of a pressure cooker of memories and expectations. He is markedly thinner than he was earlier this summer when he was first nominated to fill the O'Connor vacancy. He's been preparing constantly for his confirmation hearings, hearings that were to begin today but have been postponed until next Monday and now will be for the position of chief justice instead of associate justice.

Senate Republican leaders said today that the Democrats had promised not to invoke rules that would drag out the Judiciary Committee confirmation process, and the consensus seemed to be that Roberts is likely to be confirmed by the opening of the court term, October 3rd. Senate Democratic Leader Harry Reid, who is still uncommitted, said he would work with Republicans to get that done, but, he said...

Senator HARRY REID (Democrat, Nevada): There are no commitments of a date certain to vote on the nomination. So everyone should understand that. We're going to do everything we can so that we do have a full court by the beginning of the term. But you never know what's going to happen.

TOTENBERG: For today, though, the focus was on Chief Justice Rehnquist and the sea change at the US Supreme Court that is certain to follow his death. In electing George Bush to the presidency, the voters gave Mr. Bush the keys to the American judiciary. With two Supreme Court appointments, he will now be able to open the door. Nina Totenberg, NPR News, Washington.