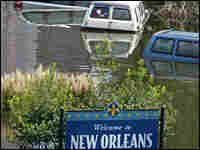 A welcome sign stands in a flooded street in downtown New Orleans, Sept. 6, 2005. New Orleans Mayor Ray Nagin has ordered that any residents still in New Orleans be forcibly removed, citing the risks of toxic floodwaters in the inundated city. Reuters hide caption

New Orleans Mayor Ray Nagin has ordered that any residents still in New Orleans be forcibly removed, citing the risks of toxic floodwaters in the inundated city. NPR Environmental Reporter Elizabeth Shogren and Health Editor Joe Neel provide an update on the environmental and health risks posed by polluted waters in New Orleans.

Q: What kind of contaminants are in the floodwaters, and where did they come from?

There's a wide assortment of pollutants in the water. The Environmental Protection Agency says its water sampling shows that the flood waters are extremely polluted with bacteria, like E. coli and coliform. That's because there is a lot of raw sewage in the water. The agency also says lead levels in the water exceed drinking water standards. The agency warns people to avoid contact with the water, to wear protective clothing if they have to be exposed to it and to wash thoroughly with soap and water if the water touches them. No one should drink the water.

There are a lot of petroleum products in the water, because Louisiana has a large oil industry. Some large spills have been reported -- one from an oil refinery, another from a production facility. Countless smaller oil spills came from submerged cars, lawnmowers and generators.

Q: Do we know for sure what pollutants are in the water?

Some pollutants are known, such as the bacteria and the oil spills. State and federal officials and scientists have been sampling the water. The first results were made available Wednesday by the EPA. Federal and state officials and local scientists plan to continue to conduct tests. So a wider portrait of the contaminants should soon be available.

Q: What kind of immediate health risks could result from polluted floodwaters?

Officials say that gastrointestinal problems, such as diarrhea, and skin problems are possible. Some skin problems being seen appear to be related to allergic reactions to the chemical soup that's in the floodwaters.

Federal health officials advise rescue workers and anyone left in hurricane-damaged areas to wash their hands frequently. They urge people with wounds or cuts that were exposed to dirty water to seek immediate medical attention.

The CDC says four people in areas hit by the hurricane have died from Vibrio vulnificus, a bacteria that can infect people who have open wounds that are penetrated with salt water. Vibrio vulnificus is common in waters off the Gulf of Mexico. The CDC says that, on average, they receive reports of 90 cases of the illness per year. Those most at risk of contracting the rare illness are elderly people or those with compromised immune systems. In addition to the known deaths, at least three other people in the area affected by the hurricane are known to have contracted Vibrio vulnificus. The CDC's Julie Gerberding says these cases should not be considered an outbreak.

Q: There have been reports of dead bodies floating in the floodwaters in New Orleans. Does this pose an infectious disease threat?

The CDC and other public health authorities say that decomposing bodies do not cause disease.

Q: As workers try to drain New Orleans, the floodwaters that covered the city are being pumped into Lake Pontchartrain. What are the risks to human health in the city once the waters recede?

Scientists said that the biggest risk that rescue and cleanup workers in New Orleans will face is heavy metals, PCBs and other contaminants that will be left behind in the sludge once the water recedes. Workers will have to wear protective clothing and masks.

Q: What about the risks to wildlife and the environment?

A: The water being pumped out of New Orleans is going into Lake Ponchartrain. Because of the raw sewage and other biological material in it, it will be very heavy in nutrients. Scientists say this likely will cause fish kills, because that water will lack the oxygen that fish and other creatures need to survive. But state officials say they hope that over time, the lake will be able to cure itself, and then fish and other wildlife will be restored.