Accessibility links
New Orleans' Live Oaks Devastated Part of New Orleans' southern charm comes from its green canopy of live oak trees. Many of those trees have been standing in water for more than a week, depriving their roots of oxygen.

Part of New Orleans' southern charm comes from its green canopy of live oak trees. Many of those trees have been standing in water for more than a week, depriving their roots of oxygen. 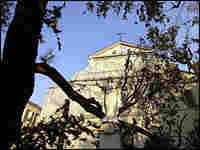 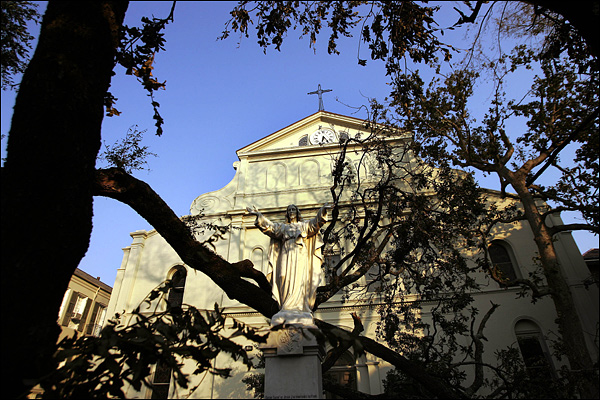 An uprooted live oak lies in front of the historic St. Louis Cathedral in the aftermath of Hurricane Katrina in New Orleans, Louisiana Sept. 5.

The pictures from submerged New Orleans show mostly rooftops and the green canopy of trees. Now some of those green leaves are starting to turn brown. The trees have been standing in deep water for more than a week. NPR's Nell Boyce reports what will happen to the city's oldest and most distinctive trees: the live oaks.

The Live Oak Society is based near New Orleans. It's a club with over 5,000 members. All but one are trees. The giant's known as live oak, and every tree has a name: Friendly Armed, Almighty Oak and Old Survivor. The bylaws of this 70-year-old society permit one human member. Her name is Coleen Perilloux Landry. She keeps the society's records.

Ms. COLEEN PERILLOUX LANDRY (Live Oak Society): And in New Orleans and City Park, we have 249 ancient oaks registered. There are over 1,000 oaks in City Park, and at the moment, all those oaks are under five feet of water.

BOYCE: As Landry cleans out her flooded home in suburban New Orleans, she's worrying about the local oaks which add to the city's Southern charm. In the Garden District, for example, the St. Charles Avenue Streetcar Line runs under a lush canopy of live oaks. Landry knows that hurricane winds damaged a lot of the trees, but she hopes that some of the society's most prominent members are OK.

Ms. LANDRY: The president of Live Oak Society, the Seven Sisters Oak, is right across Lake Pontchartrain from here, and it's weathered many, many storms. It's about 1,200 years old. So I'm sure it came through this one fine.

BOYCE: And as for the ones standing in water in City Park and other places around New Orleans, Landry thinks many will hang on.

Ms. LANDRY: The live oak is very, very resilient. I mean, it can sit in water for two weeks and still be OK unlike a lot of other trees.

BOYCE: But this flood isn't like others. Bonnie Stine works on urban trees with Louisiana's Department of Agriculture and Forestry. She says most studies of flooded trees have looked at freshwater rivers that simply overflowed their banks.

Ms. BONNIE STINE (Department of Agriculture and Forestry, Louisiana): The thing that's unique about this situation in New Orleans is that there is contaminants in the water, including saltwater intrusion. As the water came in, it's brackish water that comes up from Lake Pontchartrain. There's also other contaminants such as gasoline and other human contaminants that will remain in the water until it's pumped out of the city.

BOYCE: She says it's hard to know how the oaks are faring in this chemical stew. No one's around to check.

Ms. STINE: Well, we do have two urban foresters who work out of the City Park in New Orleans and they are both evacuated out of the city at this point in time.

BOYCE: The trees in the most danger are those that have been standing in deep water for eight days. Steve Shurtz is the forestry manager for nearby Baton Rouge. He says trees normally get oxygen through their roots.

Mr. STEVE SHURTZ (Forestry Manager, Louisiana): And you've got trees that are literally drowning or suffocating if you will for the lack of oxygen.

BOYCE: Some trees like the bald cypress can stand long periods in water. Live oaks don't like to get their feet wet. And engineers say it could take up to three months to get the city completely dry. If that's true, Shurtz predicts a lot of trees will die.

Mr. SHURTZ: I'm afraid only time was really going to tell there. I don't know that there's any definitive way to predict what the percentage of loss is going to be.

BOYCE: Shurtz is confident that lost trees will be replaced. He says New Orleans loves its trees, especially its live oaks. Live Oak Society Chairman Coleen Landry says that's because they're so green, so shady and comforting.

Ms. LANDRY: If you stand under an oak at nighttime, you can almost hear the oak talk to you. There's just something about the live oak.

BOYCE: She says oaks have even saved people's lives during past floods, but now there's nothing that people can do to save the trees. When the water recedes, Landry knows it will be her job to find the oaks and record their fate. For many of them, she will write in her ledger: Deceased by Hurricane Katrina.

STAMBERG: You're listening to MORNING EDITION from NPR News.