Accessibility links
Galveston: Destruction and Reconstruction As many as 6,000 people died in the 1900 hurricane that hit Galveston, Texas. Patricia Bellis Bixel, who wrote about the storm and how the city was rebuilt, details the operation for Debbie Elliott.

Dredge material is pumped into the island during the grade raising after the 1900 hurricane. Residents endured years of pumps, sludge, canals, stench and miles of catwalks during the project. Rosenberg Library hide caption 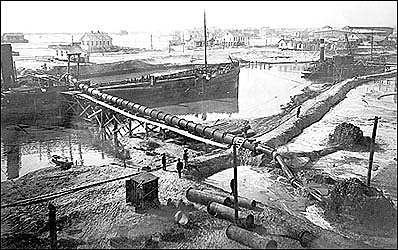 Dredge material is pumped into the island during the grade raising after the 1900 hurricane. Residents endured years of pumps, sludge, canals, stench and miles of catwalks during the project. 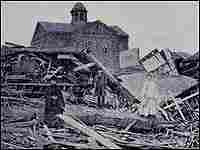 Residents of Galveston stand in the ruins of homes wrecked by the 1900 storm. NOAA hide caption 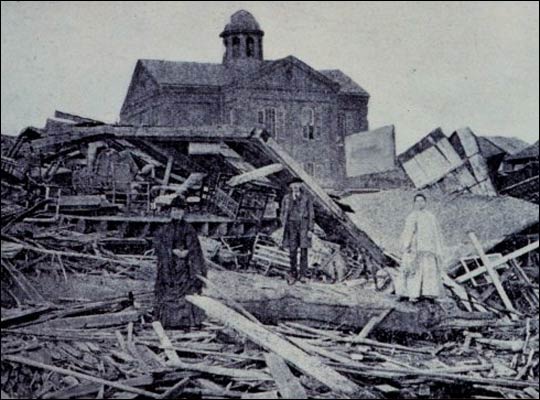 Residents of Galveston stand in the ruins of homes wrecked by the 1900 storm.

On Sept. 8, 1900, what may have been the deadliest hurricane to ever hit the United States struck Galveston, Texas. As many as 6,000 people died, and more than two-thirds of the burgeoning city's buildings were destroyed. Patricia Bellis Bixel wrote about the years-long reconstruction of Galveston in the book Galveston and the 1900 Storm. She tells Debbie Elliott how the rebuilding effort was carried out.

Read an Excerpt from Galveston and the 1900 Storm:

The Storm in Song

'Wasn't That a Mighty Storm,' sung by Eric Von Schmidt, from 'Troubadors of the Folk Era.'

The year 1900 began promisingly for Galveston. The Spanish-American War was over, and shipping traffic resumed its normal level. On January 16, 1900, C. P. Huntington confirmed the purchase of the Galveston, Houston, and Henderson Railroad and its integration into the larger Southern Pacific rail system. Exports still greatly exceeded imports in port traffic, but the rapid growth of Texas and the upper coast meant increases in arriving goods as well.

In the spring, Galvestonians completed the Texas Heroes Monument, a magnificent edifice at the intersection of 25th Street and Broadway, that celebrated Texas's success at the battle of San Jacinto and the subsequent victory for Texas independence. The statue had been part of the bequest of Henry Rosenberg, and the Sidney Sherman chapter of the Daughters of the Republic of Texas supervised its construction. It was dedicated on April 21, 1900 -- anniversary of the battle of San Jacinto -- and celebrated with a long parade and ceremony, the occasion marked by many speeches and much band music.

For most of the country the year began January 1, but for large portions of Galveston, the calendar began on September 1, when cotton season opened. Each September the Galveston Daily News acknowledged the event with a large feature devoted to an annual business report of "the trade and commerce of the Port of Galveston." The 1900-1901 season was no exception, and economic forecasters were overwhelmingly optimistic. Galveston had surpassed New Orleans to become the top cotton port in the nation, and during 1899 had moved to second place (after New York) in wheat exports. Transport problems caused by the Spanish-American War were over, and while the troublesome Boers in South Africa affected British ships and shipping, Galveston leaders watched for an expansion in traffic through the port as the year progressed.

For the first week of September, the front page of the newspaper reported the ongoing Boxer Rebellion in China and assorted European adventures. The 1900 presidential race was shaping up, and the Daily News dutifully recounted speeches by candidates William McKinley and William Jennings Bryan. The status of cotton on the world market was reported on a daily basis, and the decision by Lancashire spinners to buy or not concerned many in the Gulf port. Each Sunday the paper listed the depth of water over Galveston's outer bar for the previous week. On Tuesday, September 5, the Daily News described the Labor Day parade of the previous afternoon, and local unions were commended for their "fine showing in the procession." The writer commented that "there seemed to be more good humor, snap and ginger about yesterday's parade than any turnout for the past several years." Peightal and Booth, contracting tinners, received first prize for their float, which was in the shape of a star on either side of the float, and ornamented with fancy tin work. cornice [sic] worker's furnaces, tinners' tools, and decorative work were placed so as to form a pleasing display... A huge, well fashioned eagle, all in tinwork, was perched aloft." The carpenter's union and the screwmen's benevolent association also received prizes.

Elsewhere in the paper that Tuesday, a tropical disturbance was noted to be "moving northward over western Cuba." Eastbound vessels were advised to expect high winds over the eastern Gulf and Florida coast.