Ms. ALICE KAPLAN: At dawn on November 24, 1944, the day after Thanksgiving, a two-and-a-half-ton American Army truck made its way from a disciplinary center at Le Mans to Plumaudan, Brittany.

That's Alice Kaplan reading from her new book "The Interpreter." The author drew upon the observations from a French US Army interpreter to describe how Jim Crow era military courts sentenced a disproportionate number of black soldiers to be hanged in public, sometimes as Europeans and white American soldiers looked on.

Ms. KAPLAN: The citizens of Plumaudan were to be informed, but official attendance should be limited to authorities designated by the American Army. No photographs could be taken, the Americans had said, and the local press was to omit the name of the condemned man or his unit from any of its articles. Thirty American soldiers had also received instructions. From units stationed all over Brittany and Normandy, from Caen to Morlaix, they were ordered to leave their post for one day of temporary duty in a village located seven miles southwest of Dinan. They reported that Friday morning to the commanding officer, Seine Disciplinary Training Center. He arranged them in the courtyard, designating some as official witnesses, others as authorized spectators. It was only then that they learned what their duty was. In one hour, an American soldier was going to hang. His name was James E. Hendricks.

GORDON: Kaplan writes that between 1943 and 1946, most of the US soldiers executed for capital crimes in Europe were black. At the time, less than 10 percent of the segregated Army was African-American. Beyond the statistics, Kaplan says her book reveals a painful story in human terms.

Ms. KAPLAN: One of the most moving moments in my work was when I contacted the family of James Hendricks, who was executed in November 1944. They never knew what had happened to him. Parents had received telegrams saying he had died of his own willful misconduct, and that was the case, too, for somebody we know much more about. Emmett Till's father was hanged in Italy after a court-martial and Mamie Till speaks in her autobiography about getting this letter from the Army, `Willful misconduct.' The Army advertised the executions quite widely in Europe, invited townspeople to the hangings, but with the families themselves they were not forthcoming.

GORDON: It's interesting to note, Alice Kaplan, and we should, that your father served as a prosecutor during the Nuremberg war crime trials, and I know that, while he passed away while you were young, I'm curious how much that had an effect on your movement and gravitation to this story.

Ms. KAPLAN: I think it had a huge effect. Because he died when I was only seven, I was left with a lot of books and papers. And when I was a kid, I used to love to just go through those government documents, flip the pages, look at the letters he had sent home. So I think really my interest in World War II is a kind of life sentence.

GORDON: When you think about the historical legacy that your father, inadvertently to some degree, I guess, left for you to follow, was it still hard for you to believe that this went on?

Ms. KAPLAN: Well, you know, I think really my mentor in this process has been the French writer Louis Guilloux, who knew very little about American race relations, but he had a great intuition and my favorite line of his is something like, `Even the stupidest of men would have ended up asking himself why there could be so much crime on one side and so much virtue on the other anyway.'

GORDON: And we should note that he served as a US Army interpreter during five court-martials during World War II.

Ms. KAPLAN: That's correct. And he loved the Americans. I mean, as you can imagine, after four years, he had been in the resistance, his life had been in danger, the Americans came in, he was delighted. He loved the men he worked with and he could not understand why what he considered the greatest democracy could have a racially segregated Army.

GORDON: I'm always interested in those that do research to ask this question, and that is: What was the most surprising element for you as you would dig into this story?

Ms. KAPLAN: I was really surprised that there's so many people still alive to talk about what happened in northern France in 1944. I was really surprised to find many French people who had witnessed hangings of black GIs, always wondered about it. And I was shocked by that statistic, 79 percent of death sentences to blacks in an Army that was 8.5 percent black.

Ms. KAPLAN: It has a lot of echoes with this incarceration problem today and with so much that's going on today.

GORDON: Well, the book is called "The Interpreter." It's a fascinating chapter in our history, one that has not been told very often and surprising to many and a very interesting read. The author is Alice Kaplan, and we thank you very much for sharing time and your book with us.

GORDON: Thanks for joining us. That's our program for today. NEWS & NOTES was created by NPR News and the African-American Public Radio Consortium. I'm Ed Gordon. This is NEWS & NOTES. 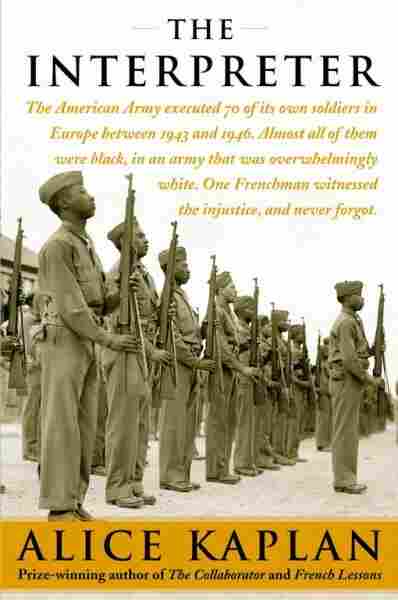